Things to Know About the Royal Highlanders 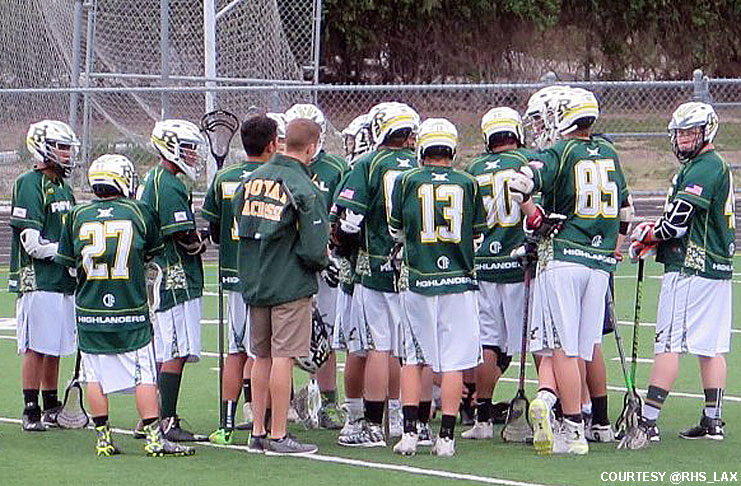 The Royal High School varsity lacrosse team has grown steadily over the years, posting eight wins last spring after only three in 2015 and one in its inaugural CIF season of 2014.

Coach Stu Sanderson pointed out that the growth of the lacrosse program mirrors some other major enhancements underway at Royal, both on the campus in general and in the classroom.

Royal’s 2016 CAASPP [California Assessment of Student Performance and Progress] test results for English beat all but two high schools in the region, and its International Baccalaureate program is in Year 2 (there are just 99 IB high schools in the state). Royal was ranked in the top 8 percent of most competitive high schools nationally by the Washington Post. Royal is upgrading its entire campus with new walkways, landscaping, fencing, shade structures and branding, and is getting 16 new complete weight rack stations as part of our athletic facilities makeover under AD Andy Andreolli.

We strongly support our student athletes at RHS and give them opportunities to be leaders on and off the field and to demonstrate sportsmanship and responsibility in everything they do.

The Lacrosse program is fully ensconced at Royal. For three years now, Royal has hosted a regular season game for the USC Trojans men’s lacrosse team. More than ever, Royal is benefiting from the top-notch Simi youth lacrosse program that saw its teams in five of seven championship games in the Southern California Lacrosse Association (SCLA) 2016 youth finals.

Royal’s two leading varsity scorers from 2016 are returning as sophomores: Brennan Krebs and Ryan Flora, with 44 and 43 points, respectively. In goal, Royal is returning Darian Stricker, also as a sophomore, who had save rate of 62 percent in 2016. All are multi-sport athletes, something we strongly support at Royal. Returning at defense, now a senior and three-year captain, is Parker Nolan, who led the team with 110 ground balls and 61 take-aways in 2016 as an all-region player. Parker is ranked at the top of his class academically and competed on an elite team [LA Mavs] this summer at University of Notre Dame.

Coming into Royal are four top players from the SCLA championship team including: Mike Sanderson, Heinz Quiroa, Jaden Chesson, and Logan Missoul. Adding these players in with other returning starters like Ryan McRae, Kevin Northcott, and Frank Candelaria, gives us a good spread of experience across ages in our program.

With the Royal girls varsity lacrosse team making the LA playoffs in 2016, and the strong foundation of players on the boys side and our ever improving record, lacrosse at RHS has a bright future.