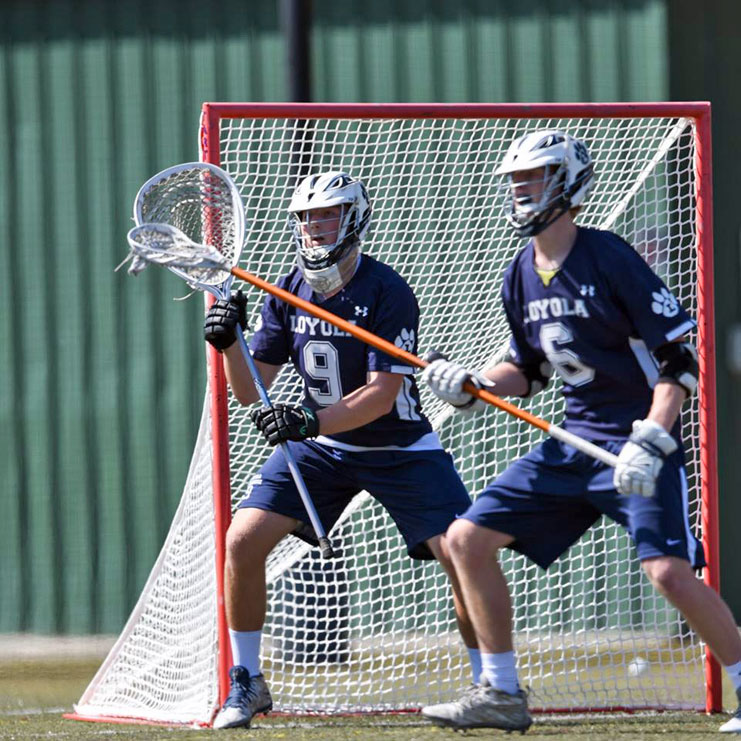 Dan Mohler, the recent past president of the Greater LA Chapter of US Lacrosse, offered this story chronicling the nine-year lacrosse connection between Loyola senior teammates Nick Mohler, Dan’s son, and Joe Theuer. More than the story of two friends, though, it’s also the story of the growth of the sport in Los Angeles. Enjoy.

If you play a sport long enough, it’s not really about winning or losing; it’s about the great people you meet along the way. This seems more evident with lacrosse, because the sport attracts special people who want to take a risk and try something
new — something that actually is the oldest sport in North America!

When Loyola HS senior Nick Mohler walks out on the field this spring to play
defense in front of Loyola senior goalie Joe Theuer, it will be their fourth year in a
row starting for the varsity Cubs. But it actually goes much further back. This
spring will be Nick and Joe’s ninth consecutive year playing lacrosse together.

And their friendship actually goes back 15 years, starting when they met in a mommy-and-me class at age 2. They started Kindergarten together at Westside Neighborhood School. By seventh grade, WNS had started one of the few middle
school lacrosse programs in Los Angeles. Palos Verdes players Hart Swan and Gage Rowland also played for WNS those years.

Nick and Joe’s first Lacrosse season together was 2008 at the Westchester Rec Center, just North of LAX. They were 8 years old. That might not be young to start lacrosse in Baltimore or even San Diego, Orange County or San Francisco, but it’s an important milestone in the growth of lacrosse in Los Angeles. Start ’em young, and great things might happen!

The Westchester Rec Center, a City of Los Angeles run program that continues today, spawned the lacrosse careers of players who have become some of the best players in Los Angeles over the past two years.

Last spring, when Loyola faced Palos Verdes in the US Lacrosse Southern Section North Final, nine players in that game had first picked up a stick at the Westchester Rec Center:

It’s not just nine seasons for Nick and Joe — it’s multiple games on multiple teams throughout each year. Nick and Joe have played together for The Hoyas, The Lions, The WAVE, The Rebels, Hollywood Box, WNS, The Lazers, Loyola, The Cobras, The
Heat, West Coast STARZ, Under Armour All American and Legends.

Nick and Joe are excited about their senior year at Loyola, but what about next year?

Each will travel 3,000 miles to Massachusetts to attend college just 10 miles from each other. Joe will play for NCAA Division III Tufts and Nick for Division I Boston University. It will be the first time in a very long time when Nick is not harassing attackmen in front of Joe, and Joe is not manning the crease behind him, making amazing saves.