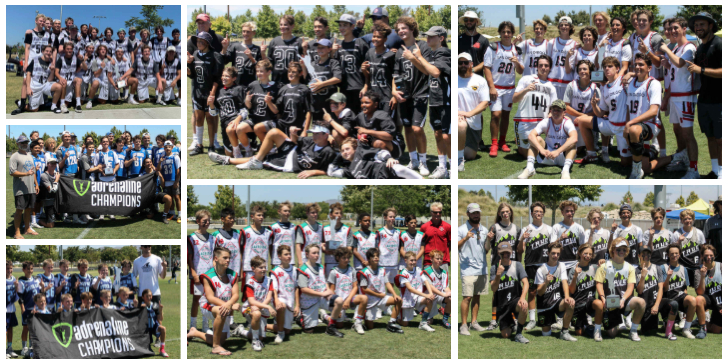 The Great Park in Irvine hosted 64 boys lacrosse teams on Saturday and Sunday in the eighth annual Adrenaline Tinseltown Throwdown.

Teams from California, Arizona and Colorado competed in seven different divisions ranging from the graduating class of 2020 to 2026/27.  Each state claimed at least one division championship.

“The facility is amazing, all the teams, it’s pretty competitive,” said JR Grubert, event manager for Adrenaline. “I’ve seen a lot of the games here. We got a lot of overtime games, so that was really cool that we had teams that were evenly matched.”

Mad Dog 2021/22 won the 2021 division by defeating LaxDawgs 6-1 in the championship game. Mad Dog went 5-0 in the tournament, which was their final of the summer. Coleman Smith had a multi-goal game and goalie Liam Donehey only allowed two goals in the playoff rounds.

True Colorado battled back from an early deficit to take down OC Pride 4-3 in the 2023 division and go 5-0 in the tournament. The game-winning goal was scored by goalie Logan Dobrowski.

OC Blackhorse beat SC Lax 2024 18-1 in the 2024 championship game. Head coach Eric Bassett credited Matt Arena for outstanding defense and Tristen Bassett for quality work on faceoffs, winning almost every one in the tournament. Blackhorse only allowed two goals in the weekend.