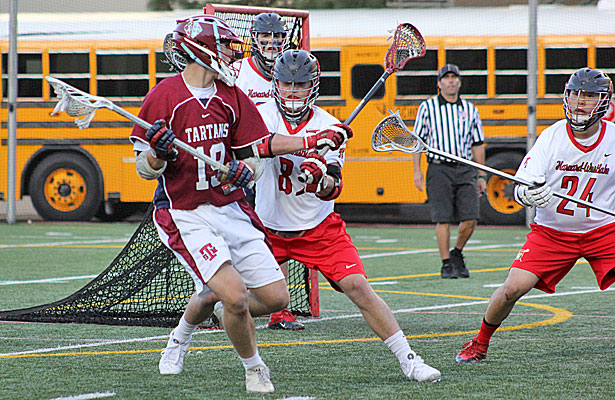 The high school football playoffs are still in session.  The winter sports season has barely got started.  It’s way too early to start thinking about the lacrosse Top 10, right? Wrong! It’s never too early to talk high school lacrosse.  So, without further ado, here is the fearless MaxLaxOC.com, Pre-Preseason Top 10.  Think we whiffed somewhere? Hit us up in the comments below, our high school forum, or on Twitter at @maxlaxinc and state your case. Or better yet cast a vote on our Pre-Preseason Fan Poll.   The fan poll will remain open until December 15.

3. JSerra Catholic High School
Last year: 17-5, Trinity League
Playoff finish: Lost 12-8 to Foothill in Southern Section Finals
The Lions have advanced a little deeper into the playoffs every year in the Kyle Harrison era.  Last season they made it to the Southern Section finals.  Will the trend continue?  Will this be the year that JSerra busts through and hoists a championship trophy?  A talented senior group led by six NCAA-bound players has the grit and the experience to do it.  Yuta Murata (Colby), Logan Olmsted (Colorado Mesa), Jake Schleppy (High Point), and James Yanes (Hofstra) will be very difficult to stop in JSerra’s free wheeling offense.  Nick Georgagi (Colorado Mesa) and Kennedy Solomon (UMBC) will lead the defense.

5. St. Margaret’s Episcopal School
Last year: 9-8, Independent
Playoff finish: Lost 7-6 to JSerra in semi-finals
The Tartans are one of the more difficult teams to assess.  A young 2014 squad lost six of its last eight games last season but came within a goal of getting past JSerra in the playoffs.  Look for the offense to really gel this year with returning juniors Kevin Cox, Nick Shanks, and Sam Harnisch and seniors Oscar Gomez and Paddy Fallon having an additional year of varsity experience under their belts.  They will get plenty of possessions with Ryan Harnisch (Denver) and Erik Suh working the faceoff X. Fernando Delgado (Villanova) and junior goalie Payton Fales will lead an experienced defensive unit.

6. Santa Margarita Catholic High School
Last year: 12-7, Trinity League
Playoff finish: Lost 14-11 to San Clemente in quarterfinals
The Eagles rebounded from a disappointing 2013 to finish 2014 with a 12-7 record as the sixth-ranked team in the Southern Section.  Senior Nico Houser (Wagner) continues to show that he has fully recovered from his leg injury and is ready to step into a leadership role.  He will get plenty of support from senior Andrew Kofoed (Notre Dame de Namur) and juniors Logan “Doc” Dochterman and Zach Taylor.   Junior Eric Rubek has played impressively over the summer and should be a force at close D this year.

9. Great Oak High School
Last year: 16-3, Independent
Playoff finish: Lost 18-11 to Foothill in quarterfinals
Look for another solid season from the Wolfpack.  They have compiled a 43-11 record over the last three years while playing a mixture of Orange County and San Diego County.  They finished 2014 ranked No. 5 in the Southern Section by LaxPower.com.

10. Trabuco Hills High School
Last year: 16-3, Independent
Playoff finish: Lost 16-4 to Foothill in first round
The addition of junior LSM Scotty Barger (Towson) via transfer from JSerra gives the improving Mustangs a new look on defense. Barger will nicely complement the offensive skills of Jake Marthens and Harrison Evans. was followed by the loss of head coach Johnny Rodriguez.  How the program responds to the recent departure of Johnny Rodriguez in the midst of a coaching shortage may determine the Mustangs’ fate in 2015.