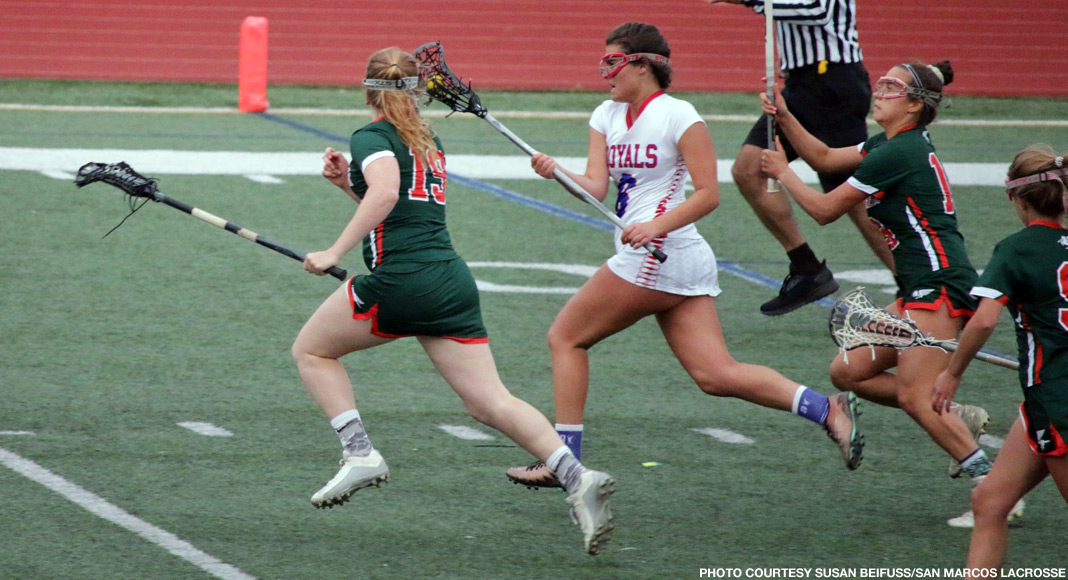 Thacher School jumped out to an 8-2 lead at halftime and went on to claim an 11-5 first-round win over host San Marcos to advance to a quarterfinal matchup at Dos Pueblos on Thursday (6 p.m.) in the LA Invitational Tournament.

In the Channel League regular season, the teams had split two games, each winning 11-10 on its home field. That factor, along with similarities in the two teams’ records and rankings, prompted the playoff seeding committee to offer them a chance to play each other one more time, with the winner earning the No. 7 seed into the eight-team bracket.

By advancing, Thacher earned a third matchup with Channel League champion and No. 2-seeded Don Pueblos. The Toads lost twice to the Chargers this season, but the most recent loss, on April 25, was 6-5 in double overtime.

Tuesday, Thacher produced a five-goal run during a six-minute span in the first half that broke the game open. an Marcos senior Ami Hammond scored the first of her team high three goals with 13:10 remaining in the first half to break the run but by then it was a 5-1 lead for Thacher and they never looked back.

“Thacher was really good at the draw control for that stretch, and they won too many ground balls,” San Marcos coach Paul Ramsey said. “They were super-efficient on offense with those possessions, so I can only say hats off to them.”

The Royals played Thacher even at 3-3 in the second half but could not overcome the first half deficit.

San Marcos goalie Shana Friedenberg made eight saves in the effort, and Hammond finished with a career-high three goals. For Thacher it was Sydney Rosenbaum (Greenwich, Conn.) who again led her team in scoring, getting six goals and mostly running the show on offense for the Toads.

San Marcos made some history, qualifying for a playoff spot for the first time since Santa Barbara Unified School District added lacrosse in 2015 at all three of its senior high schools at the same time.

“This is a nice step forward for us having made the postseason for the first time,” Ramsey said, “and we are going to build on it.”