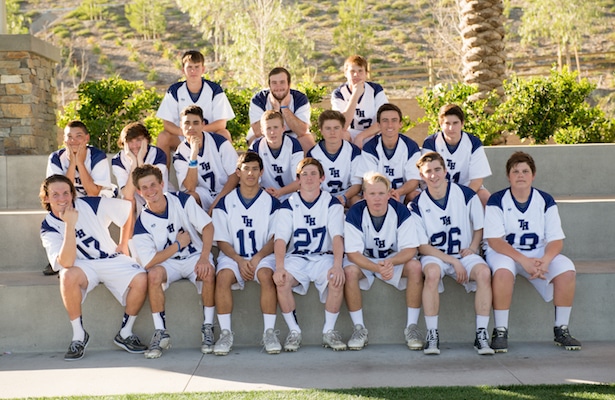 The No. 8 Trabuco Hills Mustangs hosted the No. 7 Tesoro Titans on Tuesday night that may influence coaches and the selection committee when the final votes are cast on Saturday.  In addition to the playoff implications, the game had much sentimental value from many of the parents players.  A large group of seniors that have competed with and against each other since U11 OCLAX days, Saddleback Starz, Wild Horse, and the 241 Classic were on the field together for the last time. Tuesday night’s game lived up to the hype and was a fitting end for both teams senior classes.

On another sentimental note seniors Harrison Evans, John Kauo, Cole Spooner were playing their last high school games with younger brothers Holden, Jason, and Carson respectively.  The brothers made the most of it, scoring 10 of the games 14 goals.

Harrison Evans  (1a, 4g) got the party started for the Mustangs with the first two goals of the game.  The first coming on a feed from Wyatt Koudelka, the second was a highlight reel, MaxLax top 10 worthy diving goal from just outside the Titans crease.  That pair was followed by Scotty Barger turning good defense into offense.  Barger went into transition after a takeaway, and fed Jason Kauo to make it 3-0. With the Mustangs on the verge of breaking the game open, Braden King (1a, 2g) scored a momentum-stopping unassisted goal for Tesoro in the final minute to make it 3-1 at the end of the first quarter.
The second quarter began with Tesoro freshman Carson Spooner weaving his way into the interior of the Mustangs defense and ripping a shot off the pipe of Nick Wilson’s goal. The near miss may have been the start of a run by the Titans, however it proved to be a sign of the night ahead for Wilson. Wilson was stellar in net all night, turning away shots from outside, on the wing, and a number of point blank shots to keep the Mustangs ahead of the Titans.  Brian Graves (1g) was finally able to get one past Wilson to keep  Tesoro in the hunt at 3-2.  The Mustangs came right back, helped by  a Titans penalty, when Harrison Evans fed Holden Evans for the first of his two goals.   Not to be outdone, the Titans kept up their passing game when Spooner (1a, 1g) fed King his second goal to make it 4-3, pulling to within one goal at the half.
The second half began with Mustangs senior John Kauo dodging his way through several Titans defenders for the first of his two goals. Kauo’s goal was followed by an outstanding individual effort from Holden Evans, who made his way through three Titans in a tight space to score and momentarily put the Mustangs ahead 6-3. The goal was negated after Evans was penalized for an illegal stick.  Taking advantage of the Mustangs’ woes, King returned the favor to Carson Spooner with a nice feed while the Mustangs were a man down to make it 5-4.
From that point on the scoring was all Trabuco for the rest of the game.Mustangs defenders, lead by the play of Patrick Zanio were able to kill the remaining minutes of the penalty and hold on to a slim 5-4 lead. The Mustangs got back on track when senior Wyatt Koudelka scored on a nifty dodge from X to bring the score to 6-4. The ensuing face-off saw Barger come away with a turnover after a monster yard sale check. The possession resulted in an unassisted goal from John Kauo.

The play of the night may have come at the 1:30 mark of the third quarter. The Mustangs started with the ball just inside their defensive half of mid-field with a man-down. Harrison Evans was quickly surrounded by three Titans. Not to be denied on senior night, Evans cleared the triple team, maintained possession to kill the remaining seconds of the penalty, and finished things off with a dodge and a jump shot goal from the top of the crease. The goal brought the Mustangs’ bench to a frenzy as they began to realize a win against a top 10 team and cross-town rival was in sight. Evans‘ effort put the Mustangs firmly ahead at 8-4.

The fourth quarter ended with the Mustangs defense blanking the Titans and the offense adding two additional goals from Holden Evans and Jason Kauo. The night saw both programs honor their senior classes, many of whom who have been and will be lifelong friends. The Mustangs return to South Coast League action on Thursday when they travel to Capo Valley. The Titans travel to Santa Ana on Thursday to face the Mater Dei Monarchs.

The Mustangs would like to congratulate Tesoro Titans coaches Nick Tintle and Knute Kraus on their recent selections to the Denver Outlaws of the MLL. Both coaches have had an impact on the careers of players from both teams and we look forward to watching them succeed on the field this season