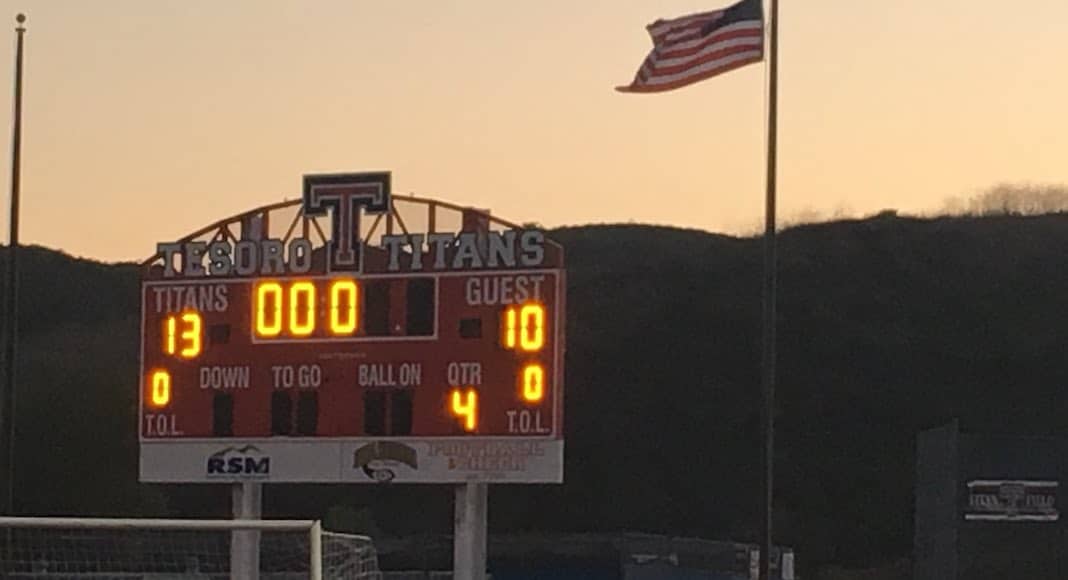 The Tesoro train was a little slow pulling out of the station Thursday night but once it got rolling, it built up enough steam carry it all the way to  Segerstrom High School on Saturday. The No. 3 Titans overcame a slow start to fight off a challenge for crosstown rivals Trabuco Hills and emerged with a 13-10 victory, their perfect season intact, and their first appearance in the County Final Four. They will play Foothill, a team that has never missed the Final Four.

The two freewheeling teams played at an atypical slow pace in the first quarter characterized by long possession and long shots as the two defenses succeed in pushing the ball out to the perimeter. Jake Wathen and then the teams spent the remainder of the quarter swapping goals with Holden Evans and AJ Switzer tallying for the Mustangs and Jonathon Gibson and Ryan Harrington scoring for the Titans.

The pace picked up considerably in the second quarter with Tesoro building up a 7-4 lead that would stand up for the rest of the game.  Carson Spooner and Jason Moreta put Tesoro’s offensive depth on display as they opened the Q2 scoring to make it four Tesoro goals from four different players to give Tesoro their first lead.

After Switzer tied the game with his second of the game, Moreta added his second and Gibson completed a hat trick to make it 7-4 Tesoro at halftime.  Cooper Gatine came up with some big saves for Trabuco to keep the game from getting out of hand.

Tesoro continued to dictate the pace after the half and exploit their numerous offensive options.  A Kalil Scales goal sandwiched between two from Spooner gave the Titans a 10-4 lead.Yet the pesky Mustangs would not go away.

One of the few teams in the County who can match the Tesoro pace, the Mustangs scored three straight of their own and showed they have a few options too.  A goal from Switzer and two from Tyler Payne made it 10-7. Gibson’s fourth goal interrupted the Trabuco run and made it 11-7 as the fourth quarter began.

Goals from Scales and Moreta gave the Titans a 13-7 lead that proved to be insurmountable.  The Mustangs never gave up though and may have actually pulled off the comeback were it not for the efforts of Hunter Souza who came up with a number of big stops.  Although the Mustangs were able to slip three more past Souza it was not enough.