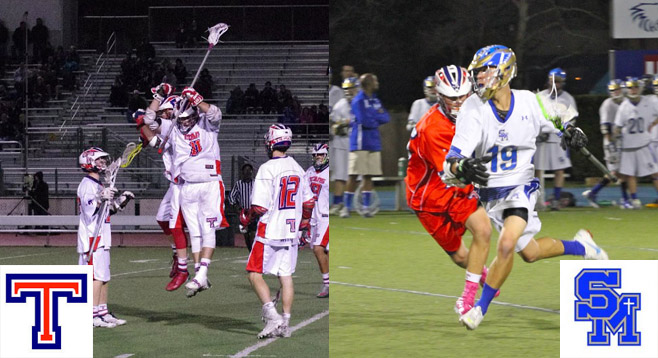 Trailing 7-6 late in the third quarter, the Tesoro Titans reeled off five straight goals–three while on man-up courtesy of back-to-back unreleasable Santa Margarita bench penalties–and stormed to an impressive 14-9 win Friday night at Tesoro. The loss is the first of the year for the No. 5 ranked Eagles (3-1); the win lifts No. 8 Tesoro to 4-1.

The third quarter swing altered an otherwise see-saw battle up to that point. The teams tied seven times leading up to the 7-7 deadlock in the third when Coach Adam Guy’s Eagles bench was flagged twice for arguing a call. Questionable as the mitigating call was, the subsequent penalties gave Tesoro an opening and they capitalized in a big way. Blake Warner (4 goals), Riley Finn and Brandon Mayo (4 goals) all scored during the unreleasable penalty, followed by another Warner goal on a nice wraparound to go up 11-7 with 1:27 to play in the third.

SM’s standout attackman Hayden Ruiz (3 goals, 2 assists) snapped the five-goal run by scoring his third of the night on a nifty one-hander while shielding his defenseman to bring SM to 11-8, but Tesoro showed its mettle by scoring the next three to seal the game before SM scored with seconds to play for the final margin, 14-9.

MaxLaxOC.com’s Three Stars of the Game:

1) Brandon Mayo, Tesoro, Midfield. This guy brought it from the opening face off. He’s a high-energy player who embodies Coach Adam Miner’s workmanlike approach. Notched four goals on the night all with rifle lefty shots from outside.

2) Hayden Ruiz, Santa Margarita, Attack. The Boston University bound star showed off his versatility, playing midfield, attack, setting up on the wing and holding court at X. He finished with three goals and two assists; one goal was a spectacular one-handed wraparound driving from X.

3) Gunner Garn, Tesoro, Goalie. Santa Margarita came out gunning and Gunner was ready (yes, pun intended). The Eagles sent 11 shots at Garn in the first quarter, and he allowed just two to elude him. By keeping Tesoro in the game early, he allowed the pesky Titans to stay toe-to-toe with the higher-ranked Eagles and notch the home win.

Honorable Mentions: You can’t ignore the contributions that Tesoro attackmen Sage DeVault (1 goal, 4 assists) and Blake Warner (4 goals) and middie Matt Costanzo (3 goals, 1 assist) made. These guys played great and could easily have earned top three billing if not for the other outstanding Titan efforts.