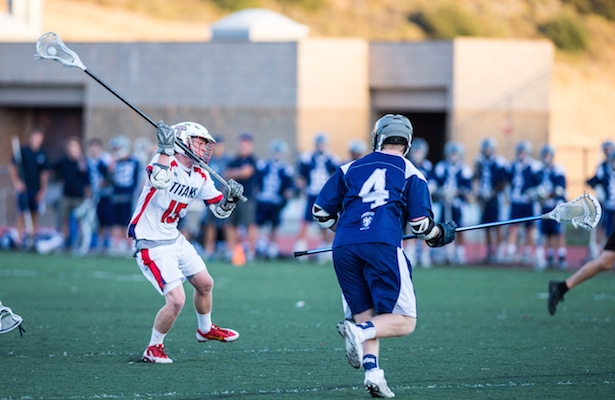 Big was the word of the day for the No. 10 Tesoro Titans on Tuesday.  The Titans honored their big senior class of Nathan Raya, Gunner Garn, George Magula, Mitchell Bender, Zane Smith, Zach Espinola, Cole Roberson, Nathan Whalen, Gage Bauer, Quinn Toohey, and Blake Warner on Senior Night.  The Titans then hit field and in a big upset defeated No. 6 Trabuco Hills 9-8, creating a big three-way tie between for second place in the South Coast League. The Titans will now play a big game on Friday against San Clemente to decides who stays in second place and who does not.  Finally, the Titans created some big headaches for the coaches and seeding committee. It is safe to say that the 6 through 11 seeds are up for grabs with four days left in the season, and it will be up to the Coaches’ Poll and the seeding committee to sort it out.

Perhaps inspired by the pressure they are getting from No. 11 Newport Harbor in the rankings, Tesoro came out quick and determined and put up two goals in the first two minutes.  From their it was another one of those back and forth affairs that local lacrosse fans have become accustomed to as teams jockey for position in the seedings.  Tesoro caught fire in the late third and early fourth quarter and enjoyed a 9-6 lead with 6:30 to play.  Trabuco closed the gap with two goals in the next two minutes but could not complete the comeback.  A final shot by the Mustangs in the closing seconds became Garn’s 13th save and sealed the 9-8 victory for Tesoro.

Led by the close defense of Cameron King (2 groundballs, 1 caused turnover), Magula (1 gb), and Toohey (1 cto, 3 gb), the aggressive Titans were only the third team this year to hold the Mustangs to single digits.  Cole Spooner did every thing but step into the cage and make a save;  he had a monster night with 13 faceoff wins, one goal, one assist, seven groundballs, and a caused turnover. Roberson (1g, 7gb)  got it done at both ends of the  field at LSM, and Garn once again showed that he is a game-changing goalie with 13 saves, 1 cto, and 7 gb.  Bender had 3 gb.