Cole Spooner Leads Tesoro into Round 2 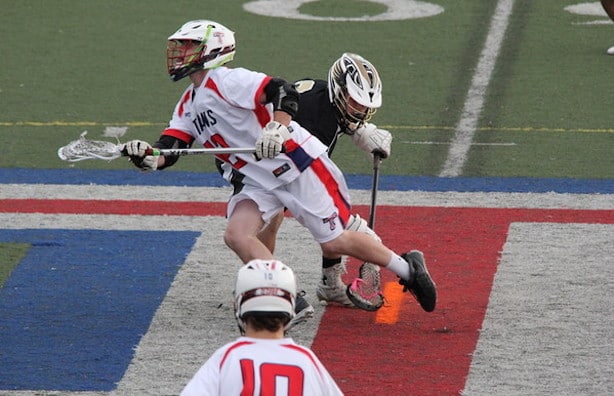 Good things came in threes for No. 8 Tesoro on Tuesday night,  Down 4-2 to No. 9 El Toro late in the game, Cole Spooner scored three unanswered goals, the final coming in the third overtime, to give the Titans a 5-4 win and a ticket to the next round.
Tyler Collins (1g,1a) as he has so many times this season put the Chargers on the board first with an  an unassisted rip after battling through the defense. Brian Graves (1g) and Trent Tubbs (1g) responded to give the Titans a 2-1 lead at halftime.  Braden King (1a) was credited with the assist on the Tubbs goal.
The first two third of the second half belonged to Tesoro.  Parker Matthews, Chris Garcia and Jack Vandenburg scored unanswered goals to give El Toro a 4-2 lead.  The Titans were having obvious troubles solving the El Toro defense,  and as the game progressed it looked four goals would be enough to win the game.  However with about five minutes left in the game, the Tesoro offense showed signs of life. Jason Moreta (1a) fed Cole Spooner (3g) to put the Titans one goal closer while the clock ticked down. With less than two minutes reaming, Spooner’s younger brother Carson Spooner (1a) then fed his older brother for the tying goal, locking up the game at 4-4 as the regulation clock ran out.
With two tired yet determined teams the overtime period started but neither team could find the net and both defenses showed no mercy. The second overtime window ended the same as the first; tired and scoreless. Cole Spooner then started the third overtime period with a faceoff win and a sprint downfield, using the last of his energy to find an unassisted top corner and finish round one of the CIF playoff game with a win for the Titans; 5 – 4.
Tesoro travels to Corona del Mar on Thursday to play the No. 1 Sea Kings in round 2.