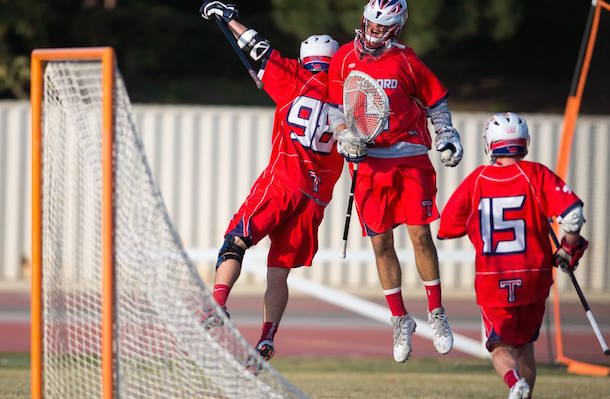 In a re-match of an earlier South Coast League match up, N0. 8 Aliso Niguel traveled to No. 10 Tesoro to finish out their regular season series with the Titans.  The Wolverines entered the game tied for first place in the SCL with a 3-1 league record and shot at their first SCL title.  The Titans, with a 1-3 league record entering the game, were looking at a chance to play the spoiler and perhaps improve their No. 10 spot in the coaches poll.

Aliso started the scoring quickly with a dynamic goal by senior attack Jonah Rinaldi (Colorado Mesa; 4 goals,1 assist) which somehow snuck by senior goalie Gunner Gunn (Michigan; 11 saves).  Another Wollverines goal gave them a 2-0 lead before Mitchell Bender (1g) and Cole Spooner (2g) answered for the Titans.  Another Rinaldi goal gave the Wolverines a 3-2 lead at the end of the first quarter.
More strong defense was on display in the  second quarter with Tesoro outscoring Aliso to 2-1 in the quarter to make it a 4-4 halftime score.
The 2nd half proved to be a demonstration of adjustments, which opened up the offense  and lead to scoring runs.  Tesoro got the upper hand first, scoring four unanswered goals to open the half and take an 8-4 lead. Blake Warner (Colorado State; 2g,2a) demonstrated his leadership by being involved with most of the scoring run for the Titans.  Aliso would not be deterred though, and they responded with five straight goals to finish out the third quarter.  Ball movement by junior attack/middie Garrett Hoang (1g, 3a) and fellow junior attack Jake Lombardo (2g) was key to the Aliso run.
The undoing of the Wolverines proved to be a three man-down situation resulting from an unsportsmanlike call on two Aliso defenders followed by a third penalty on a defender.   The Titans seized on the opportunity presented to them and evened the score at 11.  The Titans then took the lead for good with 1:15 remaining in the game.  Aliso had one last chance to tie the score at the end of the game, but was unable to convert, leaving the Titans with the 12-11 victory.
Freshman Jason Moreta (3g,2a) had five points for the Titans and Braden King (2g,1a) had three.   Matt Jones scored two goals for the Wolverines,
Next up: Aliso (8-5; 3-2) can create a three-way tie in the South Coast League race again when they travel to No. 7 Trabuco Hills (11-2; 4-1) on Tuesday.  Tesoro (4-9;2-3) travels to Capo on Tuesday.