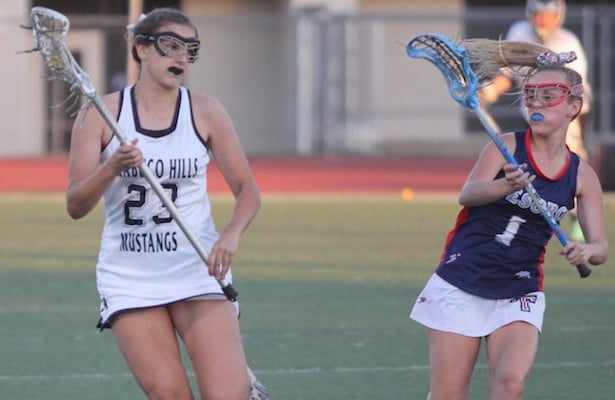 South Coast League rival Tesoro defeated Trabuco Hills 9-8 on Thursday at Trabuco Stadium.  It was the first loss of the season for the Mustangs.

The Mustangs went into the match wanting to avenge a pre-season loss to Tesoro in Santa Barbara. Heading into the game undefeated, Trabuco was confident they could play their high-paced game and come away with the win. Tesoro — a team with just one loss in 2016 — had other plans. The Titans used stall tactics and had the Mustangs chasing their attackers well past the 8-yard line, creating one-on-one match-ups. The defense was put to the test with a game plan they had not seen this season.

Tesoro scored the first goal and was ahead 5-4 at halftime. The Mustangs scored a late goal to come within one, but a full comeback was denied.

Hennessey Evans powered the Mustang attack with five goals; Shannon Smith, Hannah Moller and Kendall Derbyshire had one a piece. Evans was able to grab six draws on the night with Kendall Derbyshire grabbing two but it was not enough to control the game. Tesoro won six of the nine draws in the second half allowing them to control the ball and game.

Audie Shutler had three take aways on the night for the Mustangs, others included Moller, Gabi Bitting, and Smith. Ashley Bell had nine saves on the night.

Coach Scott Leong was not deterred by the loss, saying the intensity needs to come up during practices.