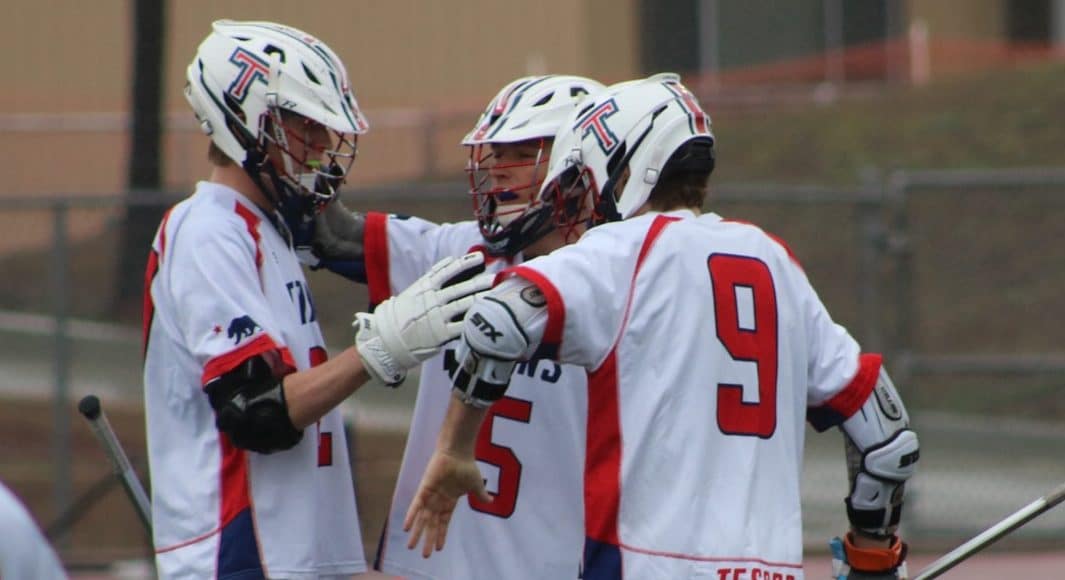 SANTA MARGARITA — The rainfall did not dampen No. 6 Tesoro’s Saturday afternoon, as the Titans earned season bragging rights over rival No. 4 Santa Margarita in a decisive 13-6 win, their first over the Eagles since 2014. The Titans (3-0) wanted to come out and make a statement, and it certainly showed.

“Playing Santa Margarita, it’s always going to be more than anything our rival,” said Tesoro head coach Brian Dunn. “We’ve taken some losses from them over the last few years, and coming out [Saturday] our seniors were thinking about it.”

Tesoro came out of the gates hot, outscoring Santa Margarita 4-1 in both the first and second quarters, building a commanding 8-2 lead at the half. Jonathan Gibson (5 goals) helped take control of the Titans offense, scoring four of his five goals in the half.

“Hats off to coach Dunn and his staff,” said Santa Margarita head coach Adam Guy. “They had an excellent game plan and they had their guys ready to play.”

The Titans offense did not entirely stop in the second half, tacking on five more goals to Santa Margarita’s four to take the game by a decisive seven goals. The key statistic in the game is turnovers as the Eagles (2-1) committed 13 of them to only three by the Titans.

“We just stopped playing for each other [on offense] and it showed,” Guy said. “We started playing as individuals and not as a team. That’s never going to get it done.”

On top of Gibson’s stellar performance offensively, the Titans got scoring from Carson Spooner (4g), Jason Moreta (2g), Luke Molinari (1g) and Ryan Harrington (1g). Hunter Souza was strong between the pipes with 10 saves against arguably one of the best offensive teams in Orange County.

“Just a complete team effort, and this is something we’ve been preaching for a long time,” Dunn said. “We’ve got a really complete team. We might not be the most deep team but everyone can play, and I’m just really proud of the effort the kids put in. We talked early on about showing our love for each other as teammates by putting out an effort on the field that’s deserving of that.”