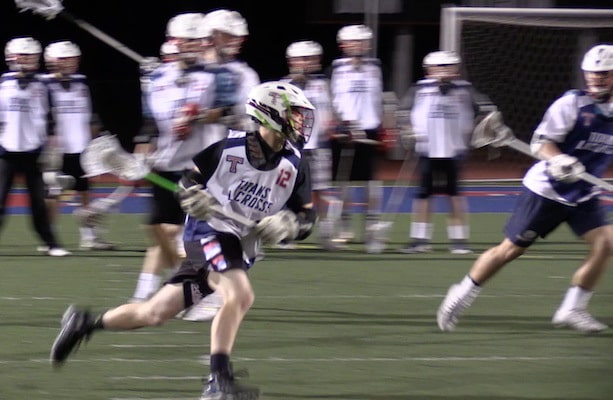 Tesoro High School defeated JSerra 11-9 in the season opener for both teams.  A second quarter hat trick from Jonathon Gibson gave the Titans a lead that they would not relinquish.

It did not take long for either team to score their first points of the season.  Less than 30 seconds into the game Braden King put away a heads-up inside feed from Ryan Harrington to give Tesoro a 1-0 lead.  JSerra came right back with Logan Carroll tying the game a minute later with an assist from Austin Shackelford. The back and forth continued for the rest of the first quarter.  Harrington scored on an unassisted high to low rip to make it 2-1 before JSerra responded with goals from Hunter Neal and Emerson Roth (assist Carroll) to take their first lead of the night.  Tesoro took the lead right back with goals from King and Harrington before Carroll knotted the game at 4-4 with a first quarter buzzer beater.

The second quarter belonged to the Titans who built up a 9-5 lead by halftime on the strength of Gibson’s three goals, and one apiece from Jason Moreta, and King.  Vincent Cifarelli scored JSerra’s lone goal of the quarter.

JSerra goals from Evan Jones, Roth, and Cifarrelli closed the gap to one before Brian Graves finished a feed from Moreta to make it 10-8 entering the fourth quarter.  Graves with an assist from Cole Spoonerextended the Tesoro lead to 11-8.  The score remained unchanged until Jones scored his second goal of the night with an assist from Cifarrelli to reach the final tally of 11-9.

Next up: JSerra (0-1) hosts Sante Fe Christian on Wednesday and travels to Yorba Linda on Friday.  Tesoro (1-0) travels to Laguna Hills on Friday