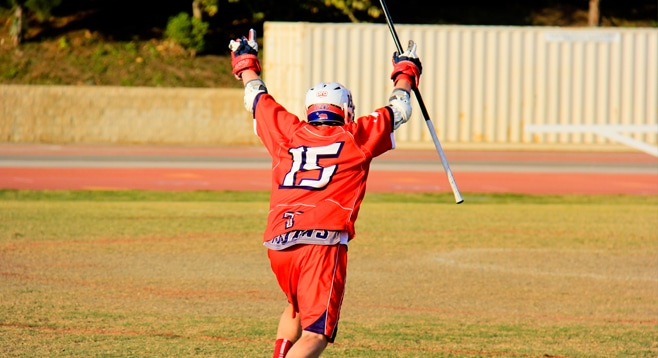 The last time Tesoro and Beckman clashed it took two overtimes to decide a winner.With a chip on their shoulder the tenth seeded Tesoro Titans made sure that history would not repeat itself, battling to a 12-5 upset over the seventh seeded Beckman Patriots.

Since the last time these teams met, Beckman beat second seeded Corona Del Mar and cruised to a 15-3 record during the regular season. Tesoro has had trouble as of late and looked to make a statement, redeeming themselves for losses to lower ranked opponents. Both teams came out fired up and looking to prove that last games tight finish was a fluke.

The two heavyweights used the first four and a half minutes of the first quarter to shake off the playoff jitters and did not register a goal due to miscues and aggressive play that disrupted offensive rhythym. Finally Beckman’s Alex Knox (3g) quickly answered and started the scoring roll that would consume the next eight minutes of play. Tesoro’s Riley Finn (4g) put one past Matt Allen on the ensuing possession. Another quick goal by teammate Brandon Mayo (3g) threw Beckman back on their heels and allowed a 2-1 deficit to become a 5-1 deficit by the closing seconds of the first quarter. Knox buried his second goal of the game with eight seconds left in the quarter that seemed to breathe life back into the shocked Beckman squad.

Knox’s goal stemmed the tide of momentum generated by Tesoro in the first quarter. Playing slightly more aggressive, Beckman was able to generate a few great opportunities. Trevor Keene (2g) was the only Patriot to get a second-quarter goal past Tesoro goalie and Michigan commit Gunner Garn (17 saves) making it 5-3 heading into half.

Keene’s second goal of the game brought Beckman to within one early in the third as hope began turn to life for Beckman. From then the Tesoro defense took control.  A well prepared Titan defensive unit repeatedly frustrated  Beckman’s attempts to find success with its bread-and-butter play,  drawing a slide and redodging opposite.    Possession after possession resulted in turnovers as Griffin Schneider, Cole Roberson and Quinn Toohey‘s held firm, negated the need to slide with great on ball defense, and bottled up the opposite side of the field.

Defensive turnovers and Garn saves became Tesoro possessions that wore down the Beckman defense. Sage DeVault (2g, 3a), Blake Warner (3g, 1a), and Mayo extended the lead in the third and fourth until the game clock read 0 and the final score read 12-5 in favor of the Titans.

Coach Miner thought of their mid season loss to Beckman as a motivating factor for his player’s performance, “When the seedings came out we knew this was one of the best matchups for us because [the coaching staff] knew that there would be a fire behind [the matchup] to motivate the guys for a big win in the first round.”