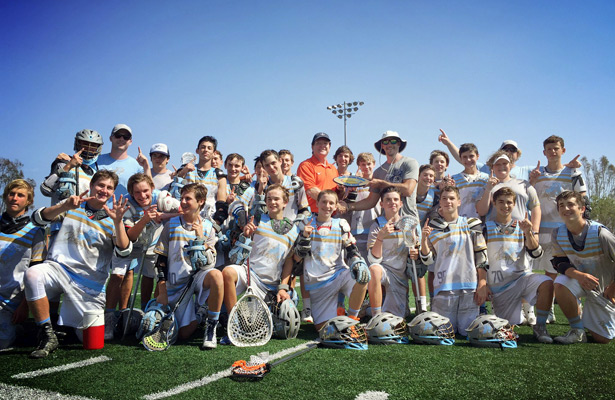 When Team West Coast 2020 heads to Philadelphia this weekend for the NXT Summer Invitational, the group will be bidding for its eighth consecutive tournament victory in the past 18 months.

In June, the U-15 squad won its division at the Tahoe Summit Classic and the Pacific Lacrosse Festival, the second year in a row it has won those events.

“Our offense has been averaging 12 goals per game, and our defense has been allowing three per game over the last three tournaments,” coach Steve Lane said. “We also have had at least seven different players scoring points for us in every game.”

Made up primarily of players from the Conejo Valley, Team West Coast 2020 outscored its opponents 41-10 at PacLax, defeating Factory Select, 3D Southland, Alpha, Mad Dog and posting a 12-1 championship victory over the LA Mavs.

This weekend will be the team’s stiffest test yet, though. At the NXT Summer Invitational — July 16-17 at Downingtown West HS, just west of Philadelphia — Team West Coast 2020 will compete with 25 of the nation’s top Class of 2020 programs.

Playing without seven players, the Team West Coast 2021 squad nevertheless battled through U-13 Elite pool play and the playoff bracket at the West Coast Showcase in Morgan Hill before losing 10-6 to ADVNC SF 2021 Black.

“Darn good job for being down seven guys, most of whom were starters,” Coach Lane said. “We were up 5-4 at one point but hit a slump for 10 minutes in the second half, and they had a four-goal run that killed us.”

Team West Coast went 2-2 in pool play with an 8-4 loss to the Washington Cutthroats and an 11-4 loss to ADVNC SF 2021 Black. In a rematch with Washington in the playoff bracket, though, TWC 2021 scratched out a 6-5 victory to reach the title game.

After winning the IMG National Qualifier in May, TWC 2021 went 2-3 at the Tahoe Summit Classic.

“It was not our best showing,” Lane said, “but we played some great teams and learned a lot. We came back and went to work to prepare for Pac Lax.”

The squad went 4-1 in that event and finished second in the U-13 Elite division.

“The only team to beat us was a very big and talented 3D San Diego team,” Lane said, “but we had great wins over Mad Dog, La Mesa Lighting, LA Mavs and 208.