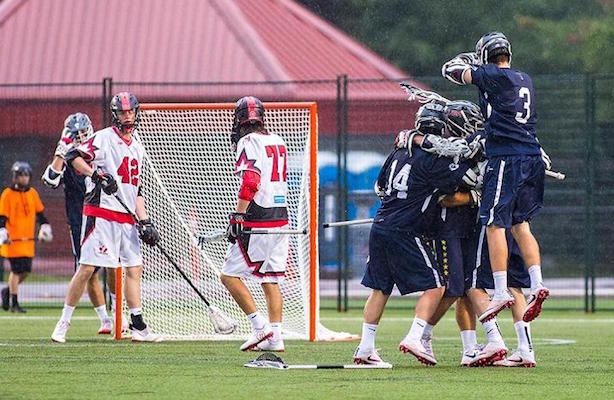 Team USA defeated Team Canada 12-5 in the opening game of of the 2016 Federation of International Lacrosse U19 Men’s World Championship.  Hugh Crance, a 2014 graduate of Corona del Mar High School, saw action for Team USA in the game.  Crance wears No. 32 for the Red, White and Blue. Team USA returns to action on Saturday with a game against Australia at 4 p.m. (Pacific time). You can watch Crance and all the U19 World Championship via live stream at sportscanada.tv/2016worldlax/<http://sportscanada.tv/2016worldlax/>

The following game recap is from a press release.

COQUITLAM, B.C.. — The United States bid for an eighth consecutive Federation of International Lacrosse (FIL) U19 Men’s World Championship<http://www.2016worldlax.com/> got off to a rousing start with a 12-5 victory over host Canada before an estimated crowd of approximately 1,500 on a rainy, chilly night.

The U.S. dominated possession early and jumped out to a 3-0 lead with two of the goals coming from Simon Mathias. Mathias, who recently completed his freshman year at the University of Pennsylvania, was one of the last players named to the U.S. team, joining the team prior to its June training weekend as an injury replacement for Drew Supinski.

After Canada finally got on the board more than 17 minutes into the game on a rebound shot by Tanner Cook, the U.S. ripped off five straight goals, including back-to-back goals by Ryan Conrad at the start of the second quarter, to stretch its lead to 8-1. Canada’s Tre Leclaire scored the final goal of the half to make it 8-2 at the break.

Canada controlled the ball for much of the third quarter, but U.S. goalie Willie Klan came up with four stops in the quarter, allowing the Canadians to score just twice and cut only one goal off the U.S. advantage.

The U.S. led 9-4 going into the final 20 minutes and a Brad Smith rocket early in the fourth quarter regained momentum for the U.S., and they went on to post the 12-5 victory.

Timmy Kelly led the U.S. offense with a hat trick and Mathias also had three points on two goals and an assist. Conrad and Michael Sowers each added a pair of goals as well. Klan went the distance in goal and finished with eight saves.

Justin Inacio took all 18 draws for Canada and won nine. Austin Henningsen was 6-for-12 and Christian Feliziani was 3-of-6 for the U.S.