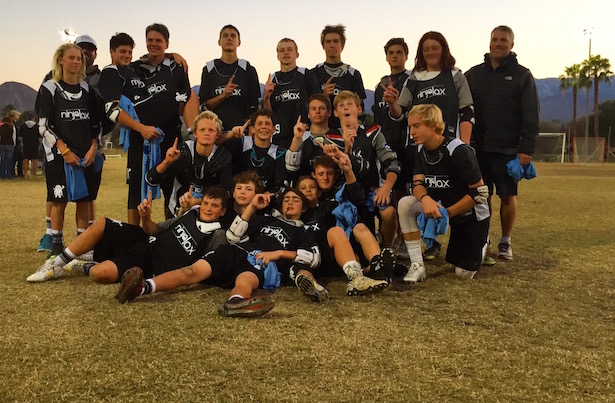 Bobby Gavin of Laguna Beach  and Chandler Fincher of San Clemente capped off their Thanksgiving weekends with a Palm Desert Lacrosse Classic Championship.  Playing on Team NinjaLax, the two locals played key roles on a team that dominated the competition  with a perfect 5-0 record while outscoring their opponents 52-11.  Gavin was strong in net all weekend for Ninjalax sporting a 2.2 GAA.  Fincher was an offensive standout.

Comprised mostly of West Coast Starz 2020 players hailing from California and Oregon, NinjaLax showed their familiarity with each other by finishing day 1 with a 3-0 record while outscoring the competition 32-7. That performance earned them the #1 seed heading into Saturday’s playoff round.

Matched up against Bunch Nation in the semi-finals, Ninjalax cruised to a 13-2 win after conceding the first 2 goals of the game to set up a rematch with a talented Mad Dog West team in the championship game. However, Ninjalax again proved to be too much to handle for the Dogs, capturing the championship with a 7-2 win.