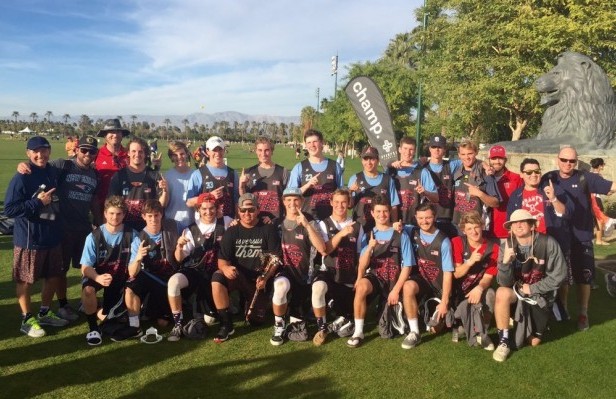 For the second time since Thanksgiving the Team 12 “Commits” & Bunch Nation invaded Palm Desert, and once again the Team 12 Commits returned home with an Elite Division title.  Team 12 followed up on their Palm Desert Lacrosse Classic championship proved to be Best in Class at the 2016 Sandstorm Lacrosse Festival run by Synapse Sports.

After sweeping through the first five games, Team 12 found themselves in a championship gam matchup with undefeated Fog City.  Fog City is centered around the St. Ignatius Prep team that was ranked no. 12 in the nation last year by Under Armour/Inside Lacrosse.    The championship game was a back and forth affair until Bubba Fairman (Utah/Maryland) and Anthony DeMaio (Coronado/Boston University) assisted each other to break open a 3-3 tie and clinch the 6-4 victory.

Throughout the weekend T12 showed their prowess with an undefeated record against other top caliber teams including Corona del Mar (3x Sandstorm defending champs), Poway (San Diego CIF Champs) and Doco LC (Colorado) who had a handful of high Division 1 committed players also.

As usual Team 12 and the other BunchNation teams were powered with a heavy dose of Orange County talent.  Johnny Cary (Temecula Valley/Colorado Mesa) and Nick Lemus (San Clemente/Air Force) were integral parts of the high-powered and balance offense that averaged 10.5 goals a game.

Sandstorm a wrap great showing by all the teams was another great weekend #sandstorm2016 #family pic.twitter.com/MFmn2jcmxV

Cole Spooner’s  (Tesoro/Westminster) performance at the faceoff X helped his team control possession throughout the weekend.

Head Coach Tom DeMaio, a former JSerra assistant coach, was proud of Team 12’s performance “Between goals for/against, 50/50 ground balls, rides/clears, lacrosse IQ, this team was the definition of what a TEAM is. We also had amazing leadership from the seniors who were determined to win this final event together. This group over the years really showed a love to play this game and when you have that, it just makes it all the more special to coach”.

DeMaio’s Elite squads have had a great run this past year. Reaching the semi-finals at both the Denver Shootout and Vail Shootout. Then going on to win Legacy Boston, 3d Riptide, Santa Barbara Showdown, PDLC, and now Sandstorm.

DeMaio says next stop for the T12 & Bunch Nation will be the Summer Series, with Teams attending Denver Shootout, Vail, and many of the top recruiting events. For more information on T12 & Bunch Nation12 and to submit an interest form, visit www.bunchnation.com.