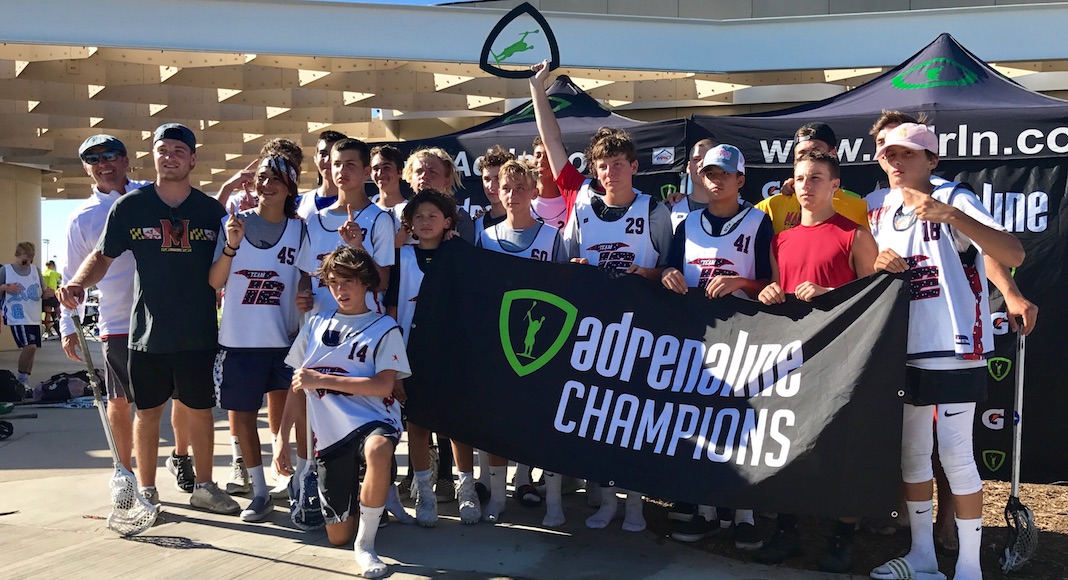 Southern California’s perfect summer weather and sandy beaches have been drawing East Coast natives to the west forever, and that is no exception for four University of Maryland lacrosse players who were ready to soak up the sunshine and surf the waves for a couple of weeks.

But in between the beach outings and paddleboarding, they seized the opportunity to help share their lacrosse wisdom with some eager youth players by coaching Team 12 players in local tournaments.

Team 12 Founder Tom DeMaio, who is hosting the Maryland players for their SoCal stint, coordinated the special trip.

“It actually came up when the Terps were out here this spring to play UNC at the Pacific Coast Shootout,” said DeMaio, who is also head coach of Santa Fe Christian high school in Solana Beach. “These guys were raving about California and the weather, so I asked them come back out to do some coaching with me in the summer, and they were all over it.”

From the Maryland roster were Tom’s son and former Coronado High School standout Anthony DeMaio, Jack Wilson, Ethan Mintzer, and goaltender Cameron Brosh; the four headed up from San Diego to Orange County for the weekend to coach Team 12’s 2022 team in the 2018 Adrenaline Tinseltown Throwdown at the Great Park.

For the youth Team 12 players, the chance to be guided and coached by members of the 2017 NCAA National Championship Team was more than exciting, as they picked up valuable tips and tricks from a few of the best college players in the nation.
“All the coaches were really positive and fun, and that made it a great team to play for,” said attackman Luke Lemus.

With temps in the high 80s and windy, the team started off pool play on Saturday with an easy win over Riverside Revolution, controlling possession the entire game and with the strong defense holding the opponent’s score to a goose egg. The second game pitted the team against a stronger LA Mavs group; Team 12 had to work a little harder to set up their offensive sets, but still came away with a 6-3 victory.

Sunday’s pool play continued with the team facing Buku 2022. Even though Team 12 controlled the faceoffs, Buku players proved more adept at throwing off Team 12’s offense, and the score was just 2-1 in Team 12’s favor at halftime. In the second half, more decisive passing and shooting put Team 12 on top 6-4 in the end. Finally, in the 4th game of pool play, Team 12 took down an inexperienced Frat Boyz team 7-0.

That win sent the team into the championship game against an undefeated Aces San Diego team late in the afternoon. The Aces’ formidable FOGO gave them initial possession often, but Team 12’s scrappy defense and some Aces turnovers helped Team 12 get on the board. In the second half, they widened the lead to 8-3, and Team 12 walked away with the Tinseltown title.
“We had a great time coaching the kids on Team 12,” said Wilson. “The kids played really hard in the heat and gave 100 percent. To me the best part was how willing the kids were to take advice and apply it in game situations. We could not asked for a better group of kids to coach.”

The Maryland players are currently coaching at the Camp 12 Elite Lacrosse Camp at University of San Diego this week, July 24-27, and will be coaching this weekend at the Tribz tournament, July 28-29, back at the Orange County Great Park. For more information on Team 12, visit bunchnation.com.)