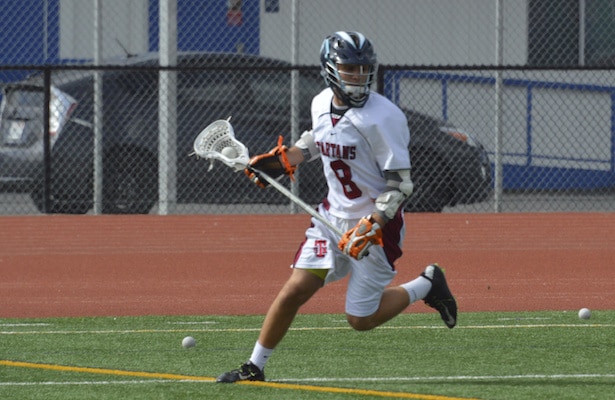 St. Margaret’s opened their season with a win (14-8) against  Oak Park on Saturday, February 28. Held at Los Alamitos High School, the Tartans were down the first two quarters and and with the half time buzzer, the score was 7-5, Oak Park. But St. Margaret’s came in strong in the second half and didn’t relent.  Stand out players included Paddy Fallon who ended the day with 7 points (4 g and 3a);  Kevin Cox (3 goals, 1 assist), and freshman  Justin Welling who impressed in his debut, scoring 2 goals,  Defensively, St. Margaret’s Nick Totah lead the charge with numerous ground balls  and turnovers. Payton Fales had a 57% save rate, with 11 saves.
Oak Park Stand out players included  Sam Torgove with  2 goals and 1 assist; and Brendon Egan scored 2.  Gianberto Ridino  looked strong in the cage in his varsity debut, thwarting many St. Margaret’s opportunities.