Tartans Return to Win Column with Win Against Newport Harbor 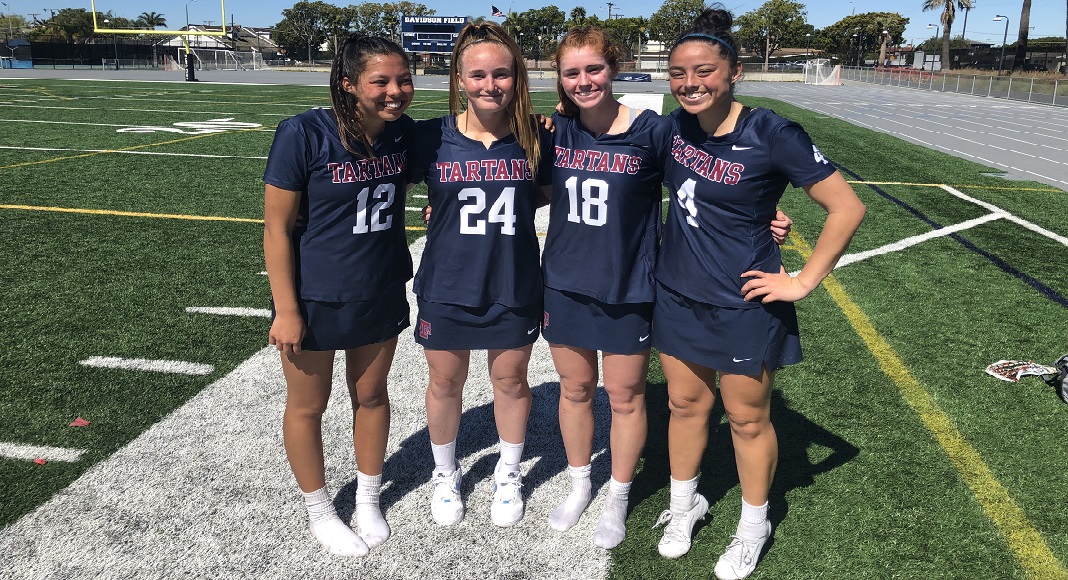 “Offensively we were able to move the ball more quickly and we committed to a team game. What that comes down to in two words is ‘buy in,’ everybody buying in to what the vision is and what the plan is on attack and then being able to, when  you forget about it for a moment someone else communicates and reminds you of it,” Tartans coach Holly Reilly said.

The Tartans were coming off of a 19-13 loss to Westlake on Thursday, the program’s first loss to a Los Angeles team since 2015. Anxious to avoid another upset, the Tartans wasted no time getting on the scoreboard against Newport Harbor.

11 seconds into the game, Campbell Case scored the Tartans’ first goal after Maddie Barkate won the opening draw control. Within a minute, she and Barkate each scored a goal to give the Tartans a 3-0 forcing an early time out from the Sailors.  The timeout helped to temporarily slow down the Tartans but that was about it.

The Tartans added two more goals before Mariana Miller registered the Sailors’ first shot and goal at the 4:20 mark of the first half. Miller’s free-position shot closed the gap to 5-1. The goal only seemed to slightly phase the Tartans, as they ended the half with three straight goals, with the final one coming off of a buzzer-beater from Barkate, giving her team an 8-1 at halftime.

Jordan Miles led the Tartans with five goals while Case and Barkate had four and three goals. Niki Miles scored twice for the Tartans while Grace Karstetter, Audrey Larson and Thalia Pollard each scored once.

“I would like to think of this game as more of showing what we are capable of and committing to the team game,” Reilly said.

The Tartans defense was stout, as they held the Sailors to only seven shots. Four of which were saved by Olivia Young.

Reilly said that Niki Miles is playing defense since two of the Tartans’ primary defenders are out with injuries.

Knipp added the Sailors’ other goal, which rolled into the goal after there was a scramble for the ball in front of the goal. Defensively, Willa Rath had five saves for the Sailors.

“St. Margaret’s is a very good team,” Sailors coach Brooke Martini said. “We didn’t give up, we kept pushing through regardless of the score. We’ll work on the things we didn’t do today.”

Both teams return to action on Tuesday. The Tartans (2-1) have a home game against IMG Academy of Bradenton, FL while the Sailors (1-4) travel to Yorba Linda.