Tanner Knego is In Command 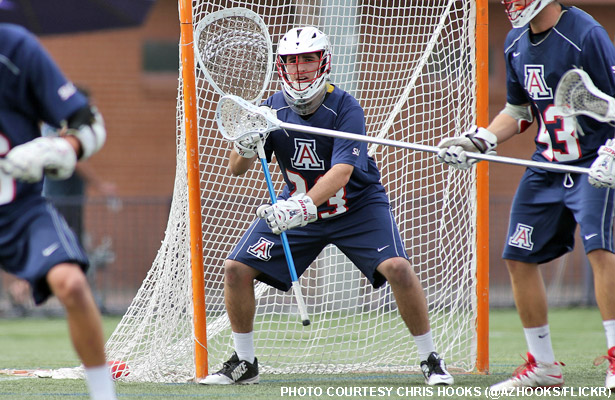 Tesoro High School graduates are tearing up the MCLA this year.  While Liam Finn and Adam Smith were each averaging 7 points per game for Boise State up in the Northwest, Tanner Knego was shutting down the opposition at the PAC-12 Shootout.  Arizona’s All-American goal was awarded the MCLA Division I Commanding Performance of the Week powered by Under Armour for the period ending Feb. 14. The full press release is below.

ATLANTA – On the strength of two dominating performances at the Pac-12 Shootout this weekend on the campus of UCLA, University of Arizona senior goalie Tanner Knego has been issued the MCLA Division I Commanding Performance of the Week powered by Under Armour for the period ending Feb. 14.

On Saturday against No. 24 Cal-Berkeley, Knego turned away 13 shots, helping the Wildcats stifle the Golden Bears, 9-3. Knego backstopped the first shutout of the young season as he stopped nine shots in a Valentine’s Day blanking of Utah to round out the weekend.

For the season Knego is 3-0 with a 2.33 goals against average and an 82.9 save percentage. He started the campaign last week with a 12-save performance in a victory against Utah Valley. The Wolverines had upset top-ranked Grand Canyon the night before.

“Tanner did a great job all weekend of seeing the ball and leading our team,” said Arizona coach Derek Pedrick. “He puts himself in great positions and has an uncanny knack of playing angles. It’s very impressive to watch him play the position. He is the backbone of our team and our team feeds off his easy-going demeanor. We also had an outstanding effort with the defense in front of him. They play a huge role as well in forcing the offense to bad angle shots making it easy on Tanner.”

For his efforts in earning the Commanding Performance of the Week powered by Under Armour, Knego will receive a new Under Armour Command Head. Under Armour is the proud sponsor of the MCLA.

Tyler Aki, Sr., Florida State – Aki opened the weekend with five goals and a dime in the Seminoles rout of Alabama in the season opener and then followed that up with four more markers and two assists in the victory over previously undefeated Auburn.

Chris Severson, Fr., Brigham Young – The Cougars tangled with a rugged UNLV squad fresh off an upset of San Diego State, and Severson lifted BYU to the 14-9 win with four goals and an assist.

Austin Lord, Soph., Cal Poly – In a big rivalry game with No. 25 UC Santa Barbara, Lord went 16-for-20 at the faceoff dot, snatched 10 ground balls and dished out an assist in the Mustangs’11-6 victory.

Grant Clifford, Jr., Oregon – The Ducks rolled over No. 22 Dominican in the season opener, 21-8, thanks in large part to Clifford. The attackman posted four goals and set up five others for the Ducks.

Adam Connolly, Sr., Southern Methodist – The Mustangs defeated Texas for the first time since 2009, 8-6, with Connolly making 17 in the SMU cage. After three games, the Mustangs are undefeated with a 5.30 GAA thanks to Connolly.