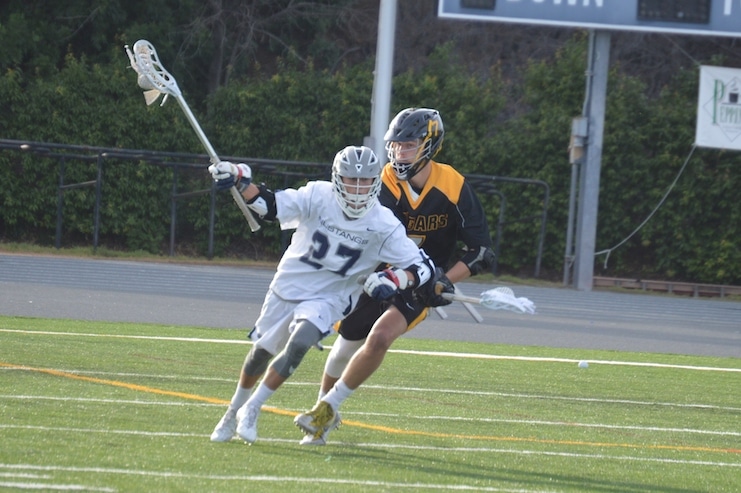 The Trabuco Hills Mustangs hosted the Capistrano Valley Cougars on Friday night in what used to be a South Coast League affair. The first half started slowly with both teams fighting off thoughts of spring break. The Cougars were enjoying their last spring break Friday and the Mustangs were looking forward to their first weekend off.

Sophomore Holden Evans sparked the Mustangs with a first-half hat trick to help the team stay focused on the game.. Evans‘ command of shooting on the run and out of a dodge was on full display. The Cougars matched the Mustangs in goals and were actually headed toward a halftime lead if it weren’t for a late goal by sophomore AJ Switzer off an assist from sophomore Jared Friesen. The first half ended with a 4-4 tie and the game’s outcome in doubt.
The Mustangs defense lead clamped down in the third quarter to set the tone moving forward.  In a team effort led by d-poles senior Jared Schoessow, junior Will Mortenson and junior Griffin Caron working in sync with the short stick middies, sophomore Justin Paget (5 ground balls) and freshmen Josh Burdette, the Mustangs allowed just one goal in the third quarter.
Meanwhile, the O was getting it done on the other end of the field.  Switzer exploded for three goals in the third quarter en route to a five-goal night. senior Mason Morris, junior Tyler Payne (1g, 2a), junior Jason Kauo (Colorado Mesa commit), and Evans also scored in Q3 to give the Mustangs a comfortable 11-4 lead heading into the final 12 minutes.
The fourth quarter was more of the same for the Mustangs who added goals from Evans (5g), Morris (2g, 2a), Friesen (1g, 1a), junior Jake Wathens (2g), Kauo (2g, 2a), and Switzer (5g).
Senior Shawn Garland was the catalyst for the second half explosion. Garland won 20 of 23 (87%) face-offs during the game, scooped up 8 ground balls, and dominated the possession game.
Senior goalie Kyle Thibault anchored the Mustangs with 4 saves.
The Mustangs improved their season record to 6-5 overall (2-3). They return to action after spring break when they play league rival Aliso Niguel (1-3, 6-4) on April 18. The  Cougars (6-3, 3-1) play Tesoro (6-2, 4-0) on April 12 in a game that could decide the Sea View League championship.