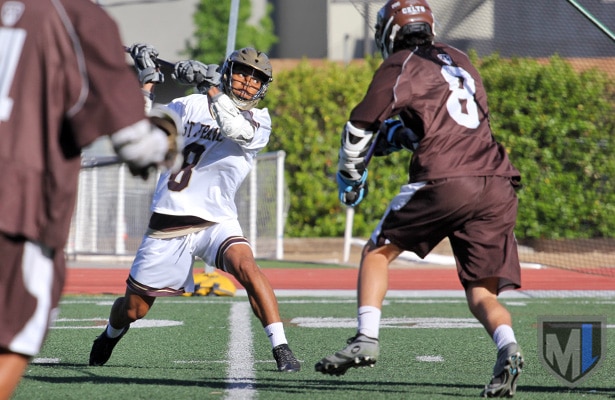 Senior attack Evan Swayne scored all three of his goals in the second half Friday, helping No. 16 St. Francis to a 9-4 Mission League win over visiting Crespi and a sweep of the season series between the teams.

The win all but secures at least a fourth-place league finish for the Golden Knights (7-5, 2-3), who have a legitimate chance at a playoff berth for the first time in the program’s four years of existence. Last year, Chaminade finished fourth in the Mission League and was seeded No. 13 in the playoffs. The handful of seniors who have been around all four years would like nothing better than to leave a playoff legacy before they graduate.

The Knights still have league games remaining against No. 1 Loyola, No. 3 Harvard Westlake and No. 6 Chaminade, all of which will be stern tests. But nonleague games with West Ranch — which St. Francis beat in double-overtime earlier this year — and Valencia give the Knights the opportunity to state their case for an at-large berth.

For a time Friday, though, it looked as if the Celts (0-12, 0-6) might throw a major obstacle in the Knights’ path to the playoffs. Crespi took a 1-0 lead on a Jack Doyle goal in the first quarter, then extended to 2-0 on a goal from Connor Leste in the second quarter. Goalie Noah Davila made seven of his 10 saves in the first half and kept St. Francis off the scoreboard for the first 19 minutes.

But sophomore Robert Gazmarian finally broke through for the Knights, scoring with 4:48 left in the second quarter, and the floodgates opened. Face-off middie Nicholas Orlando won the ensuing draw and scored 14 seconds later, and Harvey Hagen and Orlando added two more goals, giving St. Francis a sudden 4-2 halftime lead and taking much of the wind out of Crespi’s sails.

Freshman Spencer Boyle scored early in the third period to increase the Knights’ lead to 5-2, and Swayne put the first of his three in the net with 5:02 left in the third for a 6-2 advantage.

Crespi, meanwhile, struggled to gain possession or to get good looks against the St. Francis defense, anchored by goalie Michael Guida, who had 10 saves in the game.

Crespi sophomore middie Connor Pierce gave the Celts some life with two goals late in the third period, both assisted by junior attack Jake Milkovich, bringing Crespi to within 6-4, but the Knights’ Swayne scored his second goal in the final minute of the third to make it 7-4 heading into the fourth quarter.

A goal from Gazmarian early in the period all but put the game out of reach, and Swayne tacked on one more for the final margin.