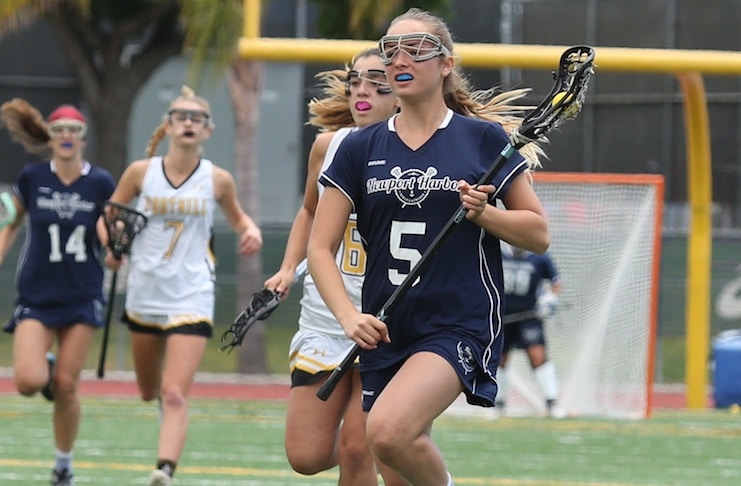 With the first week of CIF lacrosse in the books, let’s take a look at the first weekend of action for the Sunset League teams and games to watch this week.

San Clemente – Sarah Farley scored a team-high four goals and the game winner in overtime for Newport Harbor, as the No.7 ranked Sailors prevailed in overtime to take down No.15 ranked San Clemente on Saturday in the season opener for both teams at San Clemente High School.

Costa Mesa – The Friars (1-0), which only led 6-4 at halftime, were able to overpower the Sailors in the second half and win 14-7 on Saturday in both teams’ season opener at Estancia High School.

Newport Harbor tied the game at 6-6 in the third quarter, but allowed eight consecutive goals after that.

Up next for Newport Harbor (0-1), a road match against Woodbridge at 3:30 p.m. Servite’s next game is its home opener against Santiago on Tuesday at 6 p.m.

Four goals from Ben Tracy and three apiece from Kevin Arent and Matt Halvorson led Marina to a 12-5 win over Mission Viejo on Saturday.  Read the full game recap.

Games to Watch this Week

Edison (0-0): Edison will open the season at home against Murrieta Valley on Thursday at 4 p.m.

Huntington Beach (0-0): Huntington Beach has two road games this week. The Oilers open up their season against El Dorado on Wednesday and Servite on Friday. Both games are slated to start at 7 p.m.

Los Alamitos (0-0): Los Alamitos has two home games this week. The Griffins open up their season against Thousand Oaks on Tuesday at 7 p.m. and play reigning Orange County champion Corona Del Mar on Saturday at noon.

Marina (1-0): After a convincing 12-5 win over Mission Viejo, Marina plays three games this week. The Vikings play at El Dorado tonight at 7 p.m. After that, Marina plays Yorba Linda at Huntington Beach High School on Thursday at 7 p.m. The Vikings then close out the week with a home match against St. John Bosco on Saturday at 3 p.m.

Newport Harbor (0-1): Newport Harbor looks to bounce back after its ugly 14-7 loss to Servite. The Sailors have two games this week, as they play at Woodbridge on Tuesday at 3:30 p.m. Newport Harbor closes out the week on Saturday against Tesoro at 1 p.m. at Estancia High School.

Los Alamitos (0-0): Sophia Aragon will make her coaching debut on Thursday, as Los Alamitos plays at Esperanza at 5:30 p.m. The Griffins then end the week by playing in the Rose Bowl Tournament on Saturday.