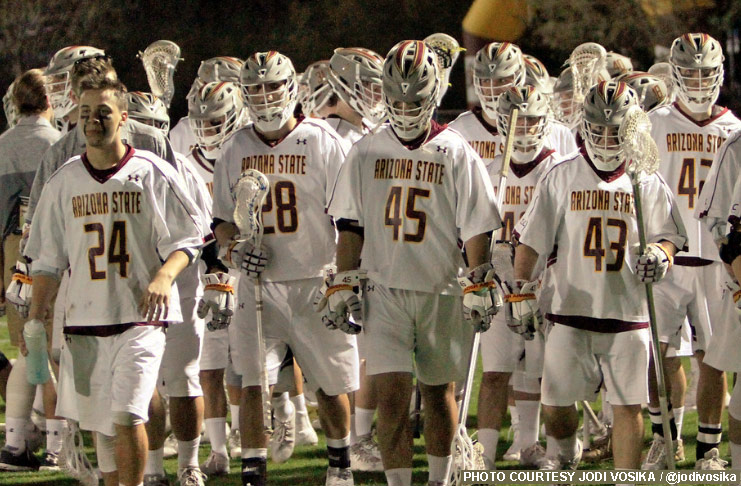 Arizona State and Grand Canyon each are playing host to Top-25 teams this weekend, as No. 4 BYU and No. 21 Virginia Tech each visit Arizona for games against the SLC South. It’s not going to be an easy stretch for either one, but it’s a big opportunity for the Southwestern Lacrosse Conference to reassert itself in the league.

The Sun Devils have a lot to prove in these contests. Sitting outside the Top 10 is unusual territory for a team that has been accustomed  year-in, year-out to Final Four appearances. After a weekend split against the Colorado schools, though, there is optimism and buzz that the program might be ready to turn it around in 2017. Junior midfielder Tommy Carrasco exploded onto the scene last weekend, tallying 9 points in the team’s two games. He will be key against a BYU defense that has allowed only 18 goals in four games, three of which were against currently-ranked teams.

Against the Hokies, ASU will be facing honorable mention All-America goalie Bryan Cooper (La Costa Canyon), who is now in his senior year for VT. The former MCLA Tournament Defensive MVP has allowed only 17 goals in the team’s four games this year, posting a save percentage of .653.

Only a quick 20-minute drive from where the Sun Devils play, the GCU Lopes have established themselves as a contender in the MCLA. Their sweep of the visiting Colorado schools last weekend netted them 10 first-place votes in the coaches poll. But the tests continue this week, as they’ll be facing a Virginia Tech team coming off an upset loss to South Carolina. Two days later, BYU visits, and it’s not likely the Cougars have forgotten last year’s 12-4 loss to GCU.

Thankfully for Grand Canyon, the Canadian pipeline is paying off again — this time, in the form of sophomore attackman Cam Wengreniuk (Edmonton, Alberta), who showed off his skills as a pure finisher with 10 goals and no assists in the team’s opening two games.

It’s time to put this OSU Beavers team to the test. Despite a 6-0 record, their wins have been largely unimpressive, featuring only one win against a currently-ranked team, Arizona, which hasn’t accomplished much in 2017. But a neutral site game against San Diego State in the Coaches vs. Cancer Tournament in Palm Desert could be the real proving grounds. This OSU team has made tournaments lately, but so have the Aztecs.

For San Diego State, the offensive leaders have been making headlines. Sophomore attackman Adrian Jeffries (Lafayette, Calif.) and junior midfielder Kevin Leis (Folsom, Calif.) have been dominating to the tune of 48 combined points through five games. The Trojans have had a rough season to date, with no wins in four games against Division I teams (USC beat D-II San Diego 10-9 in two overtimes Saturday). A win against OSU would be the perfect kick-off to a turnaround, though. Expect midfielder Coleman Lee (La Jolla) to be a key part of things, as he already has put up 13 points, including seven against SDSU.

Around this time each year, MCLA D-II pundits are faced with the same question: What should we think of the CUI Eagles? Well, this season, the answers are coming to us in the form of tangible results. A three-game set for the Eagles pits them against the UMLC’s Big 3 — St. John’s, North Dakota State and St. Thomas, all of whom are ranked in the top 5.

It’s the ultimate opportunity: Win out, and the Eagles surely will find themselves at No. 1 in the country. That’s much easier said than done, though, as the UMLC teams have dominated the Division II scene since its inception. Attackman Jonah Rinaldi (Aliso Niguel) will be crucial as a playmaker for CUI — he’s a distributor who already has 9 assists on the season. Senior attack Max Satossky (San Clemente) and sophomore Brandon Mayo (Tesoro) have benefitted, scoring seven and six goals, respectively.

All eyes will be on these three games this weekend. While a 2-1 stretch would be remarkable, Eagles head coach Ryan Brent & Co. likely are eyeing a sweep.