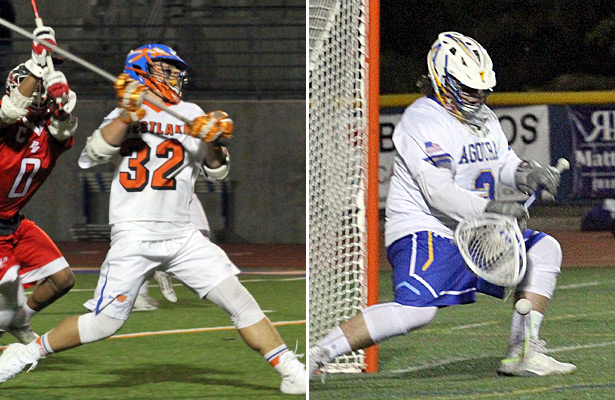 Senior defender James Sullivan of Westlake and senior goalie Jason Pawlak of Agoura were named co-Most Valuable Players of the Marmonte League, as selected by the league’s coaches.

Sullivan, who will play at Dartmouth next year, was a second-team pick as a junior. This year, he took on a much larger role for the Warriors (14-5), playing both close defense and LSM for a team that allowed only 7.6 goals per game in winning the league title and advancing to the US Lacrosse Southern Section North semifinals.

Pawlak, who will take a post-graduate year at The Hill Academy in Canada before attending college, anchored a defense that was second only to Palos Verdes among North division teams in goals allowed at 5.8 per game. In 17 games, the Chargers (10-7) held 13 opponents to fewer than 10 goals and eight to five or fewer.

Both Westlake and Agoura placed six players on the 26-member All-Marmonte team. Senior attack Brett Reilly, who is headed to Jacksonville, and junior goalie Matt Kilkeary joined Sullivan as repeat honorees for the Warriors. Reilly was co-MVP last season, and Kilkeary was a second-team selection.

Oaks Christian, which finished tied for second with Agoura and Thousand Oaks in the Marmonte standings, placed five players on the all-league team, led by repeat honoree Kaveh Torabian, a senior defender who will play at Boston University next year.

Senior attack Chasen Colter of Newbury Park received his third all-league nod, making the second-team list. He was a first-team pick last season and second-team as a sophomore. Senior middie Erich Wuesthoff also made all-league for the second time. He will play next year at St. Mary’s of Maryland.