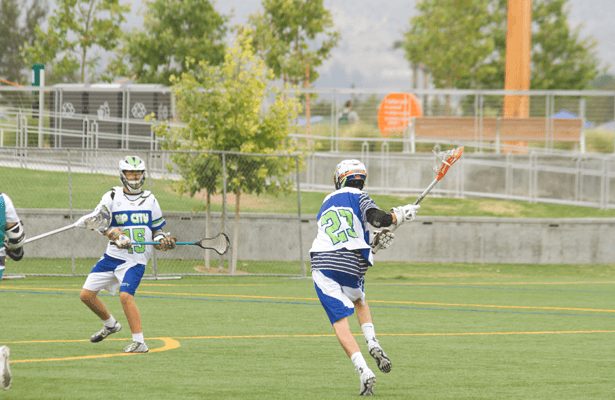 The Tribz Lacrosse California Showcase kicked off Saturday in Irvine with loads of OC talent vying for top seeds heading into Sunday.

Head coach Mike Ansel recruited many of Orange County’s finest to play for his Rip City X team. Rip City X and Rip City both were competing in the U-19 division with X comprised of mostly rising and graduated seniors. It was clear early on that the veteran advantage would be a huge part in this contest.

After a quick goal for Rip City to start the game, it would take another four minutes and multiple possessions until Manhattan commit Hunter Edington was able to rip a hole in the net with a high to high rip. Taking a different approach, Nick Southron (Sonoma State) extended the lead to three finishing a Sage DeVault feed from X after sneaking off the crease to the backside.

Southron and Edington would do it again in response to two Ducks goals in a row. Edington’s goal was a beautiful one handed dip underneath his defensemen for the inside finish showing flashes of what will make him great at Manhattan. Two Ducks goals in a row would cut the lead to two, one of which from Drake Sur who was able to sneak around the cage for an inside finish.

DeVault and Southron would connect again on an identical play from earlier to stop the Duck’s run and bring the lead back to 8-5 with five to go in the second half. In the final minutes, DeVault would finally tally his own goal fighting off an aggressive defensemen on the island for a high to high rip. Rip City X would go on to win by the final of 10-5.

Rip City was able to claw their way out of this sloppy trench battle by a final of 5-3 although Ducks Purple seemingly had them on the ropes at times. A few good defensive stands by Rip City and key takeaways by Scotty Barger (Towson) held Austin Streeter (Bellarmine) and the Ducks from mounting a late comeback.

Two very talent balanced teams had to fight hard for every possession due to sloppy clearing and long possessions. Although down 2-1 going into the half the Ducks controlled the tempo of the game on offense thanks to the Tyler and Cody Miller and Austin Streeter controlling the midfield.

In the second half, Barger, Eric Rubak, and Fernando Delgado stepped up and created easy saves and turnovers for Rip City. After neither team was able to convert on man-up all game, Patrick Fallon finally cashed on with five minutes to play in the game to give Rip City a commanding 5-1 lead. However, two back to back rips by Mory Levitt and Streeter brought the Ducks to within two with two minutes to play.

On the critical ensuing Ducks possession the ball found it’s way to the endline where Kevin Cox was able to beat two Ducks to the ball and clear it full field into Rip City’s offensive end where they were able to run out the clock.