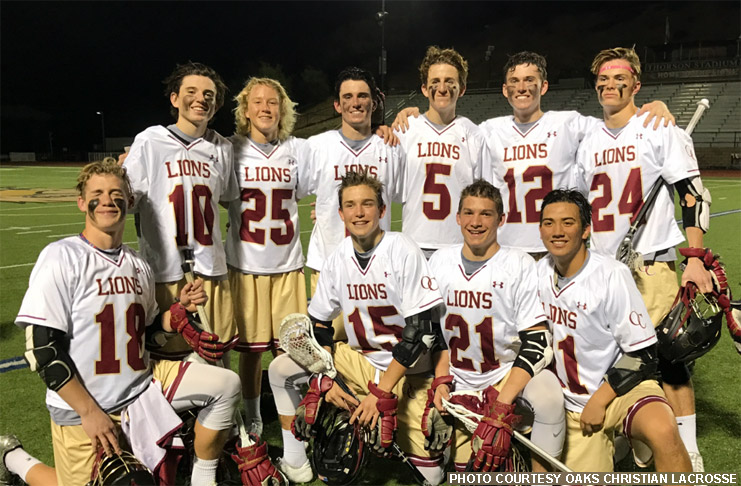 Ninth-ranked Oaks Christian limited visiting No. 8 Oak Park to only five goals Tuesday, holding the Eagles well below their season average and claiming a 7-5 victory to improve to 3-0.

Oak Park (3-1), which lost for the first time, had scored at least 12 goals in each of its first three games. Tuesday the Eagles started well, leading 2-0 on goals from Tyler Bradbury and Adam Julius and holding a 3-2 halftime edge on Bradbury’s second goal.

But Oaks Christian clamped down in the third quarter, holding the Eagles scoreless, causing turnovers and giving the Lions’ offense opportunities. They capitalized with goals from Lorenzo Santor, Danny Redell and two from Cort Rogers to lead 6-3 heading to the fourth quarter.

Defensively, much of the credit for the Oaks Christian success goes to sophomore twins Nate Lenthall and Jack Lenthall, both defensive middies. With that duo defending the midfield, goalkeeper James Vils stopping shots and freshman defender Josh Harrison helping clear the ball, the Lions carried a three-goal lead into the final period.

Oak Park didn’t go down easily, though. Sophomore middie Max Manyak and senior attack Max Bulko each scored in the fourth, pulling the Eagles to within one at 6-5 with 7:28 to play. But Carson Campbell tacked on an insurance goal for Oaks Christian with 1:57 left for the final margin.

Both teams face further tests this week, as Oak Park travels to face No. 1 Loyola on Thursday and Oaks Christian visits No. 14 Sierra Canyon on Friday.