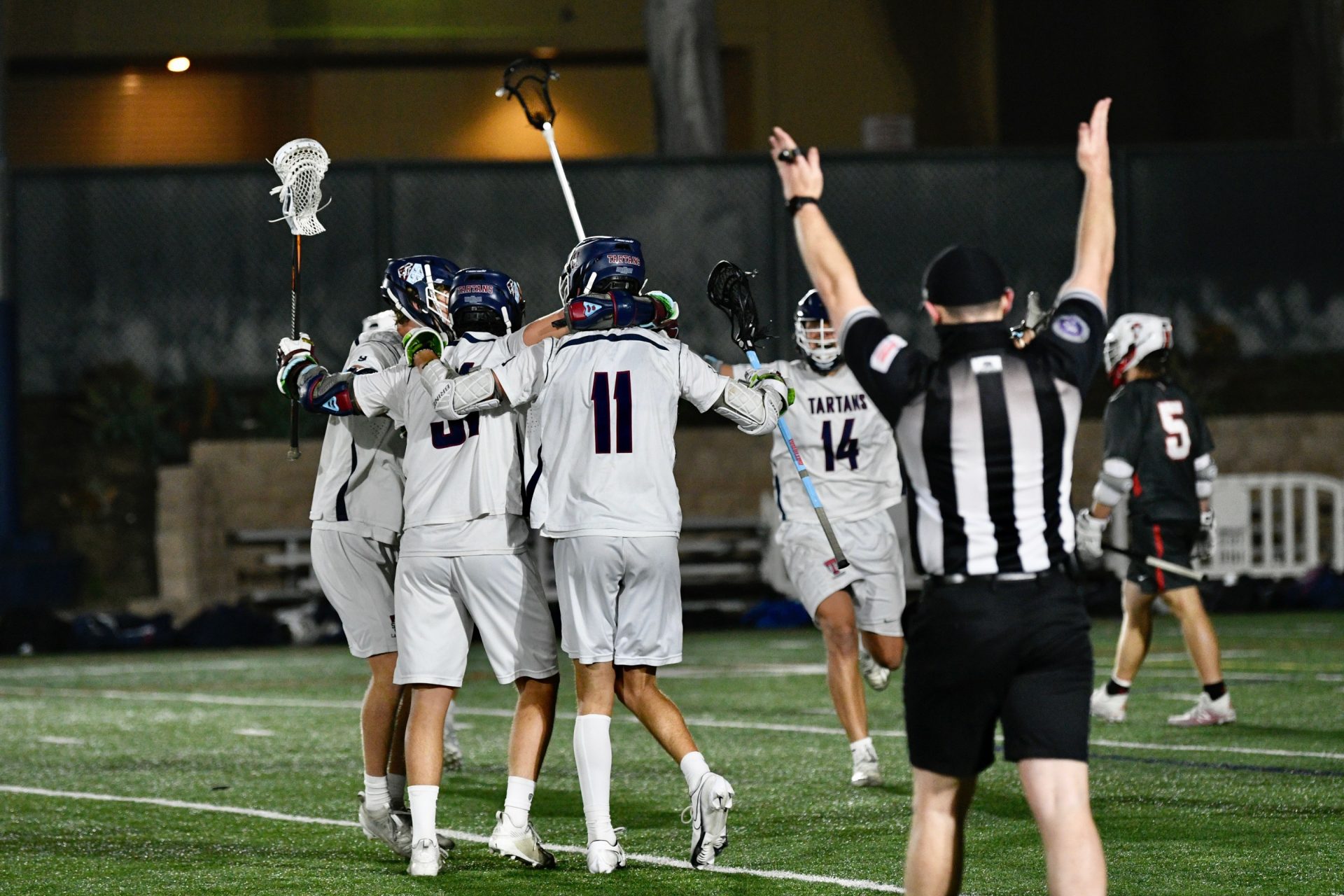 Good game at St Margaret’s Tuesday night when Santa Fe Christian came up from San Diego.   Santa Fe controlled possession by winning 78% of the faceoffs and chose to slow things down with packed in zone and very long possessions on offense. After a slow start, the Tartans adjusted by forcing the action and a faster tempo to walk off with a 12-8 win. Credit to the referees for balancing stall warnings vs possession time.

Santa Fe Christian struck first on an unassisted goal and followed that up with a man up goal to take an early 2-0 lead after the first quarter.   St Margaret’s had several chances in Q1 but were stifled by SFC’s red hot goalie, Sam Cooper, who played well the entire game. Cooper frustrated the Tartans’ shooters with five saves in the first quarter, including three from inside 10 yards.

St Margaret’s started to turn up pressure on the faceoffs to force SFC into a faster tempo.  Santa Fe Christian face off man Colton Lehberg had a big day on draws but Hayden Chester did a nice job of making it difficult for him. That strategy paid off early in the second when the Tartans began a three goal run to take their first lead of the game.

Makai Todd scored to make it 2-2.  Zoned up, Todd’s dodging ability was not what it would be in man to man but he was patient all night, distributed well, and took the shots that were there.  Owen Binder (3g, 1a) scored with 13 seconds left in the half to give St Margaret’s a boost as well as a 3-2 lead.

The Tartans would continue to pressure throughout the game. Even though SFC got a couple goals on busted plays, the risk/reward was there for the Tartans.

SFC tied it at 3-3 then went man up and capitalized to make it 4-3 early in the third quarter.  SFC appeared to have seized back the back the momentum but then Will Stahl started to heat up. Stahl factored in five of the next six Tartans goals with three goals and two assists. His first goal was an absolute rip off stick side top left corner, blowing it by the Cooper to tie the game. Binder got his second tally of the night to give the Tartans a 5-4 lead on an assist from Stahl. Those two goals started a Tartans run that brought them from down 4-3 to up 9-5.

Lehberg tied the score again, this time at 5-5, but Stahl had an answer to put the Tartans back on top at 6-5 not long after.  With 1:30 min left in Q3 Hayden Chester made a key check on a face off and Todd scooped the ground ball got it to Stahl who found Riley Chester (3g) to take a 7-5 lead.

Halen Hickman-Goveia had a nice take away on the defensive end which sparked a late goal for the Tartans in Q3.   The Tartans turned the takeaway into a back breaker when Todd fed Seth Forstot for a goal at the buzzer and an 8-5 lead at the end of Q3.

Tartans’ goalie Sebastien Chicas also played a role in the Tartans’ third quarter turnaround. He made some nice saves and excelled iin the clearing game.

Final stats for the Tartans:

Slow first half but once St Margaret’s forced faster play they took control and rolled.  This is a team that hasn’t played much field yet with Covid, mostly box, no tourneys so they should only get better.  Over the last 15 years in OC lax only 3 teams have won OC title or CIF those being the Tartans, Foothill, and Corona del Mar. During Covid odd year with Foothill top players mostly playing football, improvement over the season will be key to see who will be there when it counts.

Big one Friday as the Tartans head to Loyola.