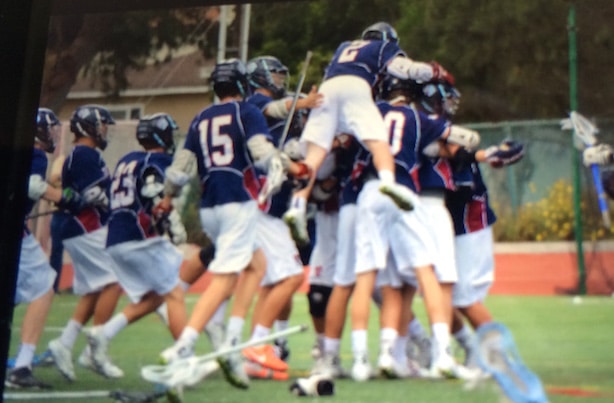 St. Margaret’s outscored Palos Verdes 6-0 in the fourth quarter of an 8-8 game to take home their second US Lacrosse Southern Section title in three years.

The game started fast and furious with the Sea Kings finding pipe in the opening seconds and Erik Suh coming right back down the other end of the field to find twine and give the Tartans a 1-0 lead. Ryan Harnisch kept the ensuing faceoff to himself and put the Tartans up 2-0. Before the game was two minutes old Aidan Westley cut the lead in half. The two teams continued to battle back and forth for the rest of the quarter with Kevin Cox, another from Suh, and freshman Conrad Hampsen scoring for the Tartans. Westley added two more goals for the Sea Kings and Mikey Booth added one to close out the quarter.

Despite losing the time of possession battle in the second quarter, PV managed to enter halftime with a tie behind goals from Austin Lowi, Peter Henkhaus, and Stanny Gilbertson. Suh and Nick Kuljis scored for the Tartans.

After finishing the first half tied 7-7, the scoring slowed down considerably with each team scoring just once in the the third period.  Both St. Margaret’s keeper Payton Fales and Palos Verdes’ goalie David McAnn made some spectacular saves as the two teams raced up and down the field in a frenetic pace to end the third quarter.

When Nick Shanks broke the tie at 10:51 of the fourth quarter, there was no reason to believe that he had opened the floodgates, but that is exactly what happened.

The Tartans assumed total control from that point forward as the Sea Kings’ defense finally succumbed to the pressure of constantly defending against Ryan Harnisch’s near perfect day at the faceoff x.  Samuel Harnisch, Paddy Fallon, Eric Suh, Shanks again, and Nick Kuljis all scored in the next eight minutes.  The Tartans ran out the clock for the final two minutes before the celebration began.