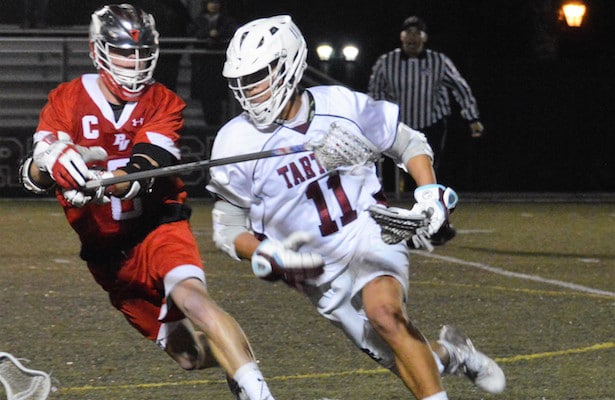 St. Margaret’s defeated Palos Verdes 10-6 Friday night in a rematch of the 2015 Southern Section championship game. A five-goal third quarter by the Tartans in an otherwise low-scoring game proved to be the difference. Samuel Harnisch (Denver) paced the St. Margaret’s attack with six points (4g, 2a). Nick Totah helped contain the potent PV offense with a strong defensive effort that included six groundballs and two assists.

Both teams played with high energy from the opening whistle, but neither was able to establish any offensive rhythm in the early going. Early goals by Harnisch and PV’s John Gressert had the game tied at 1-1 until Tommy Ruth beat the buzzer on a feed from Jack Larkin (MIT), giving the Sea Kings a 2-1 lead heading into the second quarter.

St. Margaret’s and Palos Verdes line up before the face off. @SMESAthletics pic.twitter.com/Wt7hxeI5Fk

The tide began to turn in St. Margaret’s favor in the second quarter as the Tartans started to control possession and the pace.  Erik Suh (St. John’s) won four of the six face offs, Totahnpicked up four ground balls, and the Tartans got off 15 shots. However, PV’s defense anchored by Jarrett Jones (Georgetown), Shane Sharp (Lafayette), and goalie Connor Jongerwaard (Connecticut College; 18 saves in the game) was up to the challenge and  limited the damage to two goals.   Kevin Groeninger (assisted by Conrad Hampson), and Nick Shanks (Tufts), assisted by Jeremy Davis scored the only goals of the quarter to make it 3-2 at halftime in favor of the Tartans.

After chipping away in the second quarter, St. Margaret’s broke through in the third.  Two goals by Harnisch and one apiece from Hampsen, Davis, and Shanks made it 8-3 in favor of the Tartans with 12 minutes to play. Rizal Smith (Stevenson) scored the lone PV goal.

The Sea Kings had their best offensive quarter in the fourth with two goals from Larkin and one from Aidan Wesley but it was not enough. Harnisch and Groeninger each scored one more for St. Margaret’s to reach the final score of 10-6.

Harnisch led all scorers with six points (4g, 2a). Groeninger and Shanks found the back of the net twice and Hampsen (1g, 1a) and Davis (1g, 2a) added singletons. Erik Suh was 11/20 on faceoffs.