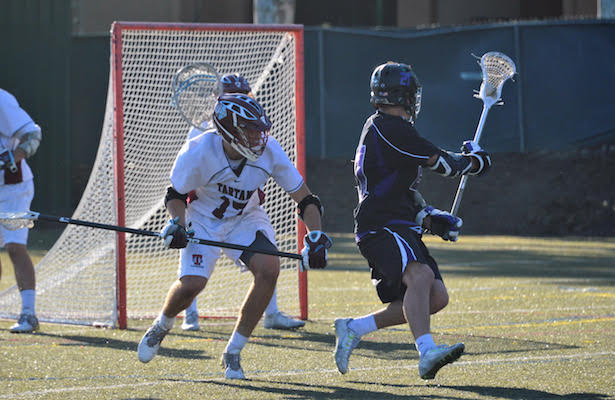 No. 3 St. Margaret’s unloaded 25 shots on Cathedral Catholic goalie Will Howard on Tuesday. Unfortunately for the Tartans, Howard stopped 16 of them, leading the Dons, the no. 7 team in San Diego to a 12-9 victory. The loss was the fifth in the last six games for the Tartans who still face two more challenges before season-end.  They finish up the season with  San Diego powers Poway (no. 7 in the west) and La Costa Canyon (no. 10 in the west).

The Tartans were in the game the whole way, trailing only 6-5 at halftime and 8-7 at the end of three quarters, they just could not breakthrough against Howard. Nor could they find an answer for Mo Mirer.  Mirer accounted for eight of the Don’s 12 points with a five-goal, three-assist outing.  Owen Peterson, Eddie Shannon, Marcus Yandall, Logan Schmitt, Ryan Fazio and Ryan Stebel also scored for the Dons.  Peterson’s goal was a beauty that may find its way to next week’s Top 10 Plays.  The defenseman took it right down Ortega Highway and stuck it in the off-stick side just off the hip.

Offensively, St. Margaret’s was led by Erik Suh and Samuel Harnisch who each scored three goals and assisted on one other.  The pair also sparked a comeback attempt in the third quarter.  Down 7-5, Suh ignited it all when he flew out of the substitution box 90 seconds into Q3, drew a slide and fed Kevin Groeninger inside for the finisher.  27 seconds later Harnisch tied it up with an unassisted goal.  The fired up Tartans continued to pressure but Howard would not relent.  He came up with two huge one-on-one saves midway through the quarter to stifle the comeback, and then added insult to injury when he ignited a fast break with an outlet pass that turned into an 8-7 lead for the Dons.

Next up:  St. Margaret’s closes out the regular season with a home game against Poway on Saturday and a trip to La Costa Canyon on April 26.