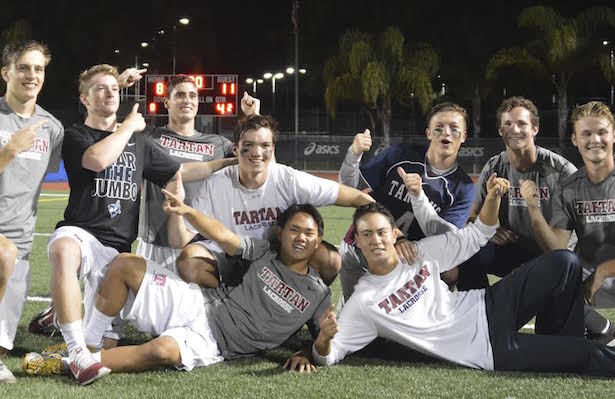 Nick Shanks scored five goals, including four straight at the end of the first half, to lead St. Margaret’s past Foothill 11-8 in Saturday’s second semi-final game. The Tartans return to the County championship game for the third time in four years. They will play Corona del Mar Wednesday at 7:00 at Trabuco Hills. The game will be live streamed on MaxLaxOC.com.

Shanks broke up a tightly contested first half when he went off on tear starting at about the 7:00 mark of the second quarter. His first goal a top shelf rip gave the Tartans their first lead of the game at 3-2. Steven Oberly got that one back quickly for Foothill, but the rest of the half belonged to Shanks as he sent the Tartans into halftime with momentum and a 6-3 lead.

Foothill fought hard to get back in the game with five second half goals but were never able to getter any closer than a three goal differential. Every time the Knights scored the Tartans had a response. A special shout out to Foothill goalie Ryan Blank who reportedly played with a torn ACL. Blank, as he has all season, came up with several spectacular one-on-one saves, including a few kick saves with his injured leg.