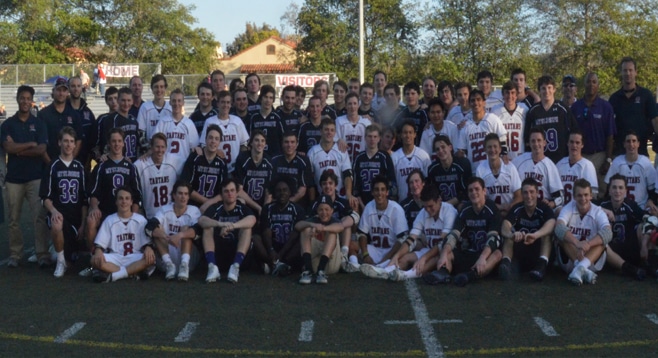 It’s been two years since the Mt. St. Joseph High School lacrosse team of Baltimore, Md., played the Tartans of St. Margaret’s, and quicker than you can say  “Crab cakes”, they showed the Tartan laxers that they were in for a serious battle.

At the 10:06 mark of the first quarter, Mt. St. Joe’s found the back of the Tartan net with a goal from Gaels sophomore attackman Jimmy Lucas.  Through the first quarter, the Tartans repeatedly turned the ball over on sloppy mistakes by virtually everyone in a Tartan uniform. SMES sophomore goalie Peyton Fales kept the Tartans in the game with savvy stops from hard shots in the heavy crease traffic. The Tartans had little success holding on to the ball and conceded one more goal by Drew Harrison ending the first quarter down 3-0.

The St. Margaret’s coaching staff must have had something good to say between quarters, because a different Tartan team emerged, going on a 7 to 1 run with goals by senior middie Josh Davis, brother Jeremy Davis, junior FO specialist Ryan Harnish, sophomore attackman Sam Harnish (2), Nick Shanks, and junior attackman Paddy Fallon.  This run was due in no small part to the brilliant face-off abilities of Ryan Harnish, who along with sophomore Erik Suh, dominated the faceoff X. The Gaels put up two points on the scoreboard in the second quarter as the Tartans went into halftime up 7-5.

The second half saw the Gaels turn up their physical game, and Ryan Harnish took the brunt of it. Lucky for the Tartans, Harnish was ok, in spite of having to leave the game more than once. But again, it was his and Suh’s face-off wins that helped the Tartans post six more scores in the third quarter. Sam Harnish rang up two goals assisted by P. Fallon and Jer. Davis. Hunter Edington added a goal to his 4 assists in the first half. The Gaels scored four more times to try and keep up with the six that SMES scored in the third.

Opening the fourth quarter, Mt St. Joes got off to a quick start, with Carter and Costabile scoring back to back, unassisted.  This brought the score to 13–11, Tartans.  Tough back and forth play ensued, until Fallon beat Gaels goalie Heinzman with a terrific assist from Nick Shanks for the Tartans very important final goal.  No sooner than Tartan fans settled back in their seats with a 14–11 lead, the Gaels came back with a shot from junior middie Tyler Snyder at the 3:15 mark.  The game then became a back and forth battle until Costabile found the back of the Tartan net with just 35 seconds left. The gap was closed to one, and everyone was standing on edge. R. Harnish won the face-off, but the Tartans lost possession, gained it back, and fought off a wildly pesky Gaels defense to kill the clock and seal a 14–13 win.

After the game, SMES assistant coach Terry Riordan said; “This was a hard fought victory, played hard to the end of the game. I’m excited for the boys to play an East Coast powerhouse and come out on top.” Head coach Glen Miles added, “ They [Mt. St. Joseph] were a very talented team. It’s a very gratifying win for early in the season. It points out a lot of things we need to work on, and I’m proud of the way we responded to the early adversity.”

After the game, the Tartan boosters treated both teams and family members to a steak and ribs cookout. The 5–1 Mt. St. Joseph Gaels take on near by Trabuco Hills Saturday before heading back to Baltimore.  St. Margaret’s (4–0) next faces Marina on March 25 at Marina.