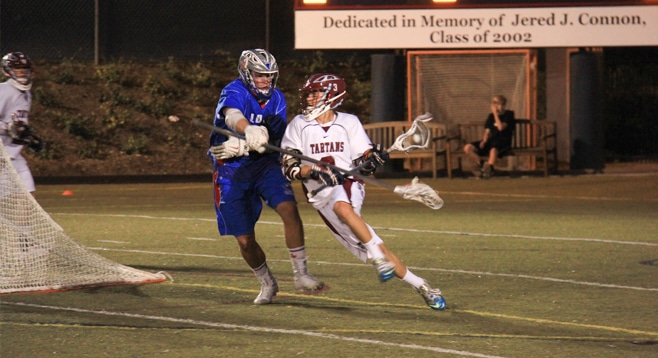 On what appeared and felt like a warm summer night, Coach Glen Miles and the St. Margaret’s figured out Los Alamitos’ game plan, execute their own, and sprint to a 16-11 victory. Disregarding the disparity in rankings, these two teams were very evenly matched physically with both sides able to create turnovers on the defensive end and run by each other in the middle of the field. In the end it was St. Margaret’s lacrosse IQ and ability to adjust that gave them the edge.

In the first quarter the Tartans went up early 2-0 off quick goals by Josh Davis (2g, 1a) and Nick Shanks (4g, 1a). After the initial push, Los Al was able to settle down the fast-paced SMES offense by packing it in and playing conservatively. This, however, put pressure on Los Al clears to execute their clearing game efficiently and make the most of every possession, which they did not do. Failed clears and rushed shots hindered the Griffin offense and the first quarter came to a close at 2-0.

The Tartans quickly adjusted on the fly and were able to utilize indoor style tactics to make the most out of the shrunken field. Ball movement and cutters shifted the Los Al defense creating windows for Davis, Hunter Edington (2g, 1a), Sam Harnisch (2g, 2a) and older brother Ryan Harnisch (2g, 1a). Time of possession was overwhelmingly in St. Margaret’s favor which led to few opportunities for Los Al to cash in. They did once off settled offense by Andy Barnett (1g) to make it 6-1 going into the half.

Ryan Harnisch was unstoppable winning 22 of his 26 faceoffs and started off each of the Tartans opening four goals over the first two minutes of the third quarter. Los Alamitos found themselves down a quick 10-1 with 10 minutes to play in the third and started to play more aggressively on defense. The change would give work in the Griffins favor as they cashed in two quick goals by Patrick Baikie (1g) and Brandon Ezell (3g, 1a). Kevin Cox answered with two of his own and the back and forth scoring battle would begin heading into the fourth.

Tyler Miller (4g, 3a) turned it on in the fourth with four of his seven points, but it wasn’t enough to overcome Los Al’s inability to clear and St. Margaret’s ability to move the ball off the ground as the Tartans would go goal for goal and finish the game by the final of 16-11.

1. Ryan Harnisch, mid, SMES: We’ve come to expect this kind of performance by Ryan but in this game, against the kind of defense Los Al was playing, it was critical to win the faceoffs and retain possession. He also showed he had some offensive prowess netting two goals and assisting on another.

2. Nick Shanks, att, SMES: Shanks put together a very solid four quarters of play. There were times when the Tartan offense wasn’t clicking but Shanks seemed to be on his game pushing every opportunity he saw in the Griffin D. Shanks is only a sophomore which means you will be hearing his name much more for the next two years.

3. Tyler Miller, att, Los Al: Anytime you put up seven points against a top tier team like St. Margaret’s it is worth mentioning. How Miller got those seven was what impressed. Almost every point came after a clear that was successful because of Miller and most importantly he kept putting out 100% effort even when Los Al was down significantly.