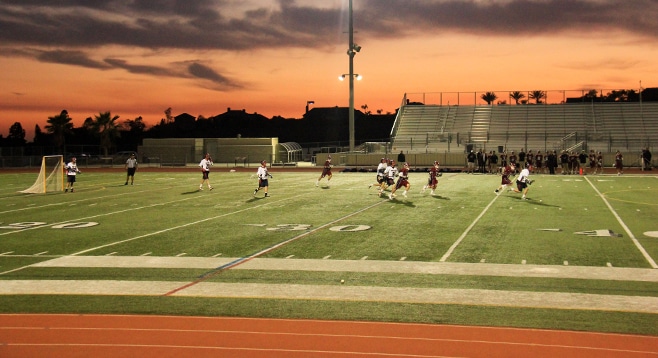 No. 1 St. Margaret’s shook off the rust and ground out a win against previously undefeated No. 14 Yorba Linda, 7-3, Friday evening in the Tartans’ season-opener. The reigning Southern Section champions waited until the end of the second week of the season to show the county what they are bringing back this year scraping out a hard fought win vs. Yorba Linda.

Yorba Linda went 16-2 last season, relatively unchallenged with a somewhat easy schedule. Coming into the game with a 3-0 record, the Mustangs saw this game as their first big test as a program. St. Margaret’s faced the challenge of scheming an opponent that has been flying under the radar and was looking for a statement win.

From the opening whistle it was clear that Yorba Linda was not intimidated by the status of the Tartans. A couple of errant passes on both ends of the field kept the game at 0-0 until Tartans attackman Josh Davis broke open the scoring seven minutes into the first. Paddy Fallon (2 goals, 3 assists) and Sam Harnisch (3 goals) added goals to close out the first quarter for St. Margaret’s as they rolled into the second frame up 3-0.

The story of the game is a two-parter and started in the second quarter; Yorba Linda goalie Mark Rentfro stepped up his game making tons of close quarter saves and St. Margaret’s had a hard time hitting the cage from beyond seven yards. The combo resulted in four goals and off 26 shots for the final three quarters.

Ryan Viadero (2 goals) and Jack Nortan delivered a two-goal combo in the second and third to keep the Yorba Linda deficit at three and keep hope alive for the Mustangs in the third quarter only trailing 5-2. Seven Tartan penalties through quarters 2-4 slowed down the game and allowed Yorba Linda to keep pace with a traditionally high paced St. Margaret’s offense.

Jeremy Davis added a goal to extend the lead for the Tartans in the closing minutes of the third to push the lead to 7-2 and Alex Vega scored off a broken clear for the Mustangs with four to go in the fourth to round out the scoring as St. Margaret’s went on to win, 7-3.

Yorba Linda has the athletes to keep up with anyone but sloppy play and timid offense really hindered their chances to come back against the champs. It will be interesting to see how they develop throughout the year heading into playoffs.

The same can be said for St. Margaret’s whose timid defense and poor shooting (7/35) let Yorba Linda hang close and turn the game into a physical match between the restraining lines. Eric Suh’s dominant performance at the faceoff X allowed the Tartans to control possession.

1) Mark Rentfro, goalie, Yorba Linda: Mark played exceptionally well and should have been credited for more saves. While the official count was 12, at least three to five shots were deflected just enough for a shot to miss the goal that may have not been counted.

2) Paddy Fallon and Sam Harnisch, attack, St. Margaret’s: The duo created tons of opportunities for themselves off picks and cuts inside. Better shooting would have landed the two with a lot more points.

3) Fernando Delgado, defense, St. Margaret’s: Fernando stayed out of the penalty box on a game that was called pretty tight. He also led the Tartans’ man-down group to hold the Mustangs scoreless in their five man up opportunities (down two men twice).