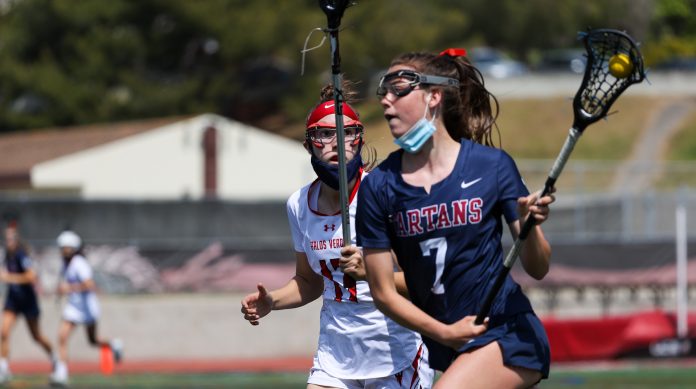 The St. Margaret’s girls lacrosse team defeated Palos Verdes 19-5 on Saturday. The Tartans improved to 3-3 while handing the Sea Kings their first setback of the season.

The Sea Kings had trouble keeping up with the speed of the St. Margaret’s ball movement and fast break game. The trio of Grace Karstetter, Minka Martinez, and Lauren Lam took care of business at the draw circle, giving the Tartans had ample possessions to work their offense. Karstetter took the majority of their draws and Martinez and Lam repeatedly beat their PV marks to the ball with quickness, physicality, & ball handling skills unlike any the Sea Kings have previously faced this season.

Eight different Tartans found the back of the net. Karstetter, Elise Peffer, Lauren Lam all collected hat tricks. Thallia Pollard, Alexia Taylor, and Caroline Gunderson had two goals each and Tessa Grosshans had one.

After varying some draw strategy Harper Skeie (2 goals + 10/25 team draw controls for their lowest 40% draw control win rate of the season) did start to find her groove later in the game, giving her sea King squad more opportunities in their offensive end. Although PV was able to get off 18 shots over the course of the game, the Tartans defense and goalie still limited the Sea Kings to their lowest point total of the season.

PV’s talented sophomore Sarah Park once again provided a spark to the Sea Kings with 3 goals, 1 assist, and a key caused turnover that led to a transition goal for PV, and provided some good momentum for PV at the end of the 1st half.

“There are a lot of young players getting valuable playing time & experience” said PV coach Todd Dearborn. “We should get some of our players who have been on the shelf back here in the next 2 weeks that will help fuel the Bay League run, and more OC teams as the second half of the season comes and the pressure amps up for everyone excited vying for top seeds in what will be our 1st official CIF playoffs in June.”