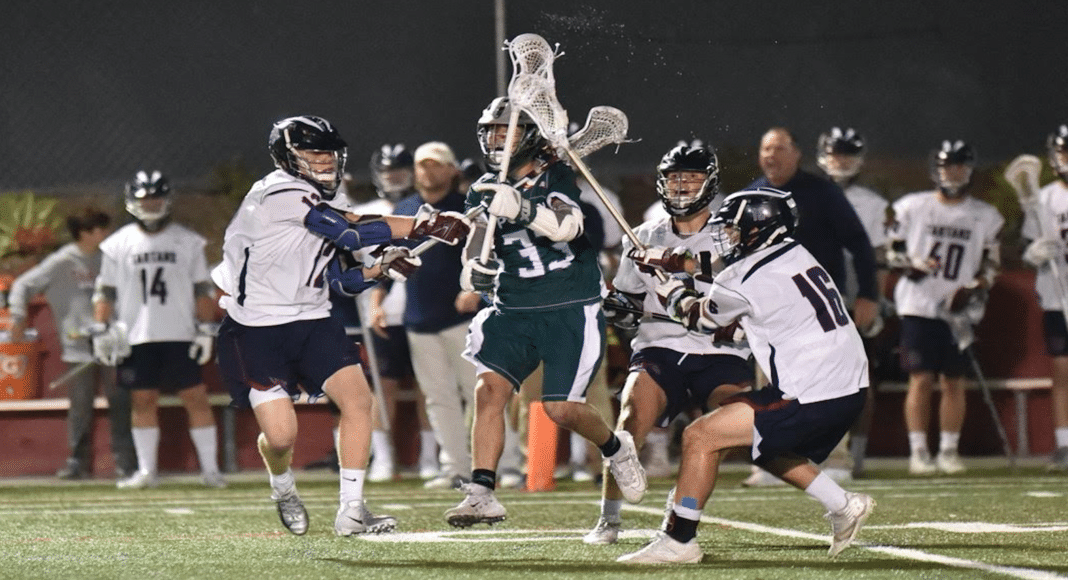 In a physical and intense contest, St. Margaret’s prevailed 9-7 over Poway on Thursday to keep its season-opening unbeaten streak intact.  Stuart Pollard won 18 of 20 face-offs for the Tartans, and that statistic was critical in a tightly contested match in which every possession mattered.

Not surprisingly emotions ran high between the two teams known to play with the a competitive fire reflecting the personality of their coaches, fellow Baltimoreans and longtime colleagues Glen Miles and Zach Burke. Despite the heated competition on the field, both coaches had high praise for one another after the smoke cleared and said the in-game adjustments constantly kept them on their toes.

“Poway’s really, really well coached. Zach does a great job with them,” Miles said. “Strategically, they were changing the defenses up pretty effectively so it did a nice job of slowing down our offense a little bit”

Poway was actually the first one to scratch by opening a 1-0 lead in the first quarter but once St. Margaret’s went up 2-1, the Tartans never looked back from there.

Although, St. Margaret’s led the rest of the way they had difficulty shaking the dogged Poway squad and the outcome was never really determined until the end. Although the Titans ultimately fell short, Burke said he was happy with the way his team played against such a formidable opponent.

“I’m proud that we battled but we spotted (St. Margaret’s) a bunch of possessions and you can’t do that to a really good team,” Burke said. “They’re well-balanced, they have depth in the midfield, they have skilled attackmen, they have a good goalie and their face-off guy is outstanding.”

For his part, Pollard, an All-County honorable mention in 2017, attributed his performance to understanding his role very well.  His ability to keep returning possession to his teammates has been a critical success factor for the Tartans this season.

“I thought I did really well, just knew I had to get the ball to the offense so we could have more offense,” Pollard said. “I was doing pretty good on the clamps and just getting out where I wanted it and my wings helped me a lot too just on ground balls.”

Andy Shin was the focal point in the Tartans’ offense as he racked up four goals, including two down the stretch to keep the game just out of Poway’s reach. Kevin Groeninger (2g, 2a), Garrett Kuntz (1g, 2a), Koa Todd (1g) and Duke Ballard (1g) rounded out St. Margaret’s balanced attack to help propel them to victory.

Goalie Zane Handy posted another game in double-digits with 10 saves. The junior continues to prove to be the anchor in the Tartans’ defense, thwarting Poway’s efforts to even the score.

For the Titans, Kienan Morrissey netted a hat-trick while Harrison Greaves and Eli Bulter added a pair of goals each.

Next up for the Tartans is a week of games against out of competition.  They visit De La Salle and host O’Dea (WA) and St. Joseph’s (MD) next week. Poway plays Corner Canyon (UT) on April 4.