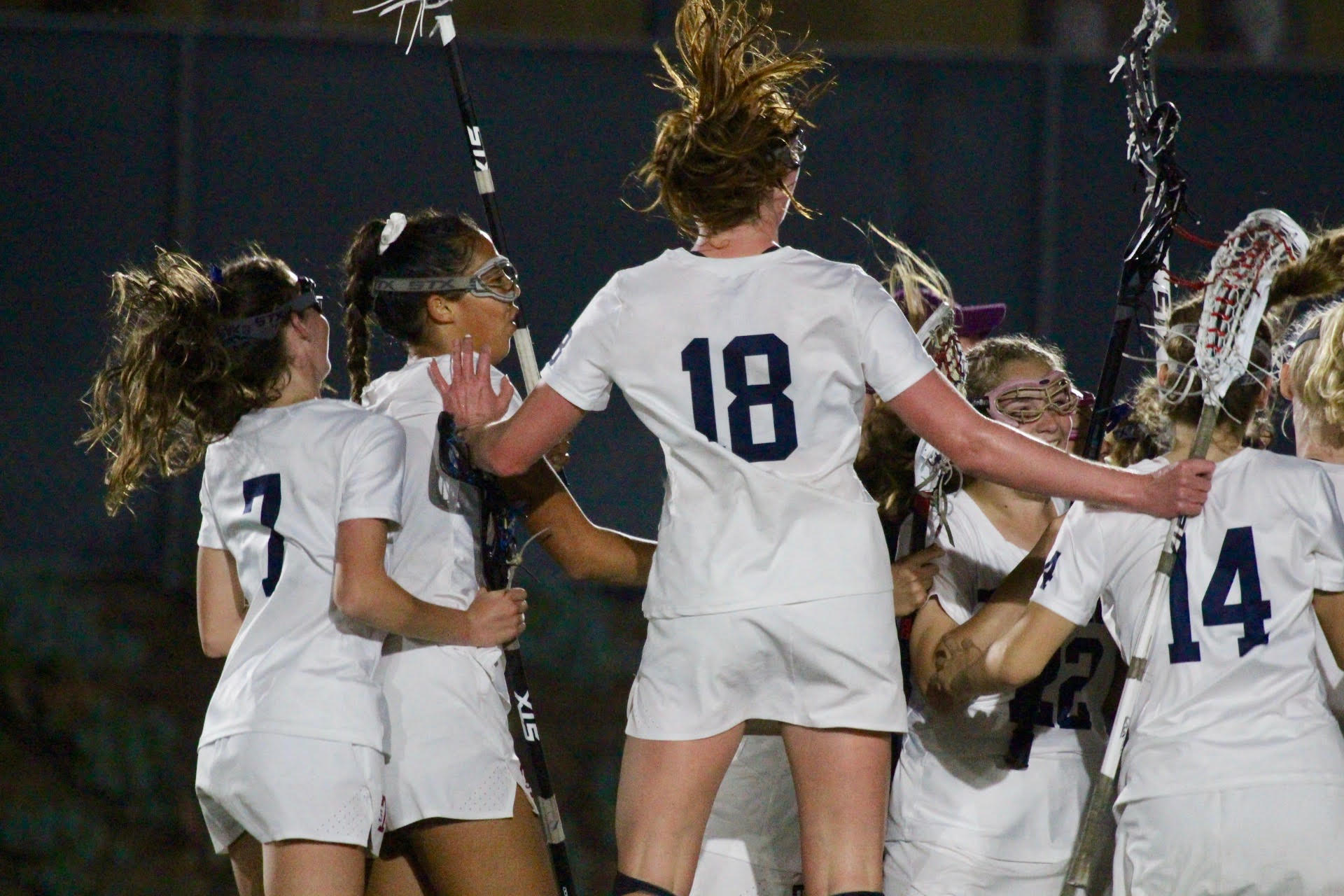 The St. Margaret’s girls lacrosse team used a combination of ball control and staunch defense to defeat Foothill 9-7 on Friday night and end the Knights’ hopes for a perfect season. The Tartans held the Knights who entered the game with a 14-0 record to 10 goals below their season average.

Nikki Miles led the the Tartans with 4 goals and 2 assistsOne of the keys to victory for St. Margaret’s was their draw control advantage (12/18) and that came into play early, allowing the Tartans to press their possession-time advantage and keep the Knights on defense.  When Nikki Miles (4 goals, 2 assists) used a power move to give the Tartans a 5-1 lead at 13:50 at the first half, it looked like the Tartans might run away with the game.

However, the Foothill defense began to settle in and force some turnovers that allowed the Knights to chip away. Over the next five minutes,  Andie Pomeroy (2g) and Ava Brand (1g) scored on  back-to-back free positions to pull the Knights and the Foothill faithful right back into the game at 5-3.

The Tartans responded by winning the draw and going right back to work.  Nikki Miles snared a Maddie Barkate (7 draw wins, 2g, 2a) pass in traffic, crashed crease, and finished to up the Tartans advantage to 6-3 at about the 6:00 mark.   The Tartans threatened to extend their lead over the last few minutes of the half but Lily Kahn (6 saves) and her best friend, the right post, would have none of it. Kahn came up with two big saves and watched a Jordan Miles (1g) clang the post and deflect to safety.

As the clock wound down past the one minute mark and the ball in the Foothill end, it looked like the Tartans would end the half with a comfortable margin.  The Knights, however, did not get the memo, and Pomeroy and Peyton Puma both tallied in the final 36 seconds to make a 6-5 game at intermission.

Both defenses clamped down even tighter in the second half and despite the close score it never felt like the Tartans were really trouble.  Nikki Miles opened the second half scoring before Brooke Williams (3g) responded for the Knights to make it 7-6.  Miles and Barkate added two more for the Tartans before a late Foothill goal brought about the final  9-7 win for St. Margaret’s.

Both teams are done for the season and hope to survive the playoffs long enough to meet again on the second Wednesday in May.