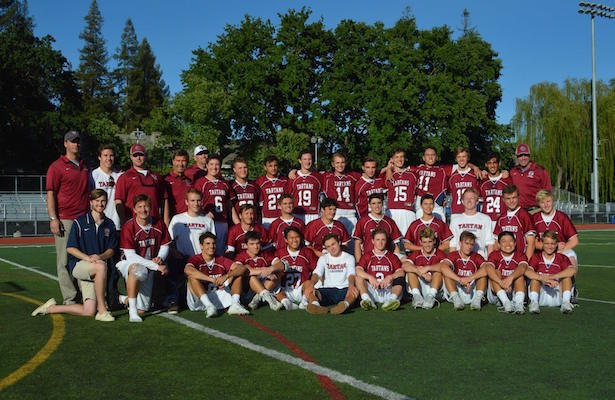 Less than 24 hours after handily defeating San Ramon Valley, the No. 1 team in the North Coast Section, St. Margaret’s  completed its three game road trip to Northern CA on Saturday by facing off against Bellarmine College Prep of San Jose, the No. 2 team in the Central Coast Section. It was a back forth game with Bellarmine holding on for a 7 – 6 victory, giving the Tartans a 2-1 record for the trip and 13-2 overall.

The Tartans who had put 16 on San Ramon Valley the night before, were finding no such success against a Bellarmine defense that has given up double digits points only twice this season.  Meanwhile, the St. Margaret’s defense was not being very charitable either.  A Bellarmine goal in the closing seconds of the second quarter sent the two teams into the intermission knotted at 4 – 4.

The Tartans scored early in the third quarter and took a 5 – 4 lead into the fourth quarter.  Bellarime scored twice in the final period to go ahead 6 – 5 and extended that lead in the final minutes to 7 – 5 as SMES pressed defensively to regain possession.  St. Margaret’s won the ensuing faceoff and after calling a timeout closed the score to 7 – 6.  The Tartans had one more chance to tie the game after winning the final faceoff but failed to convert on the fast break opportunity.

Paddy Fallon scored three goals for the Tartans, Samuel Harnisch scored two, and Nick Shanks finished  with a goal and an assist.