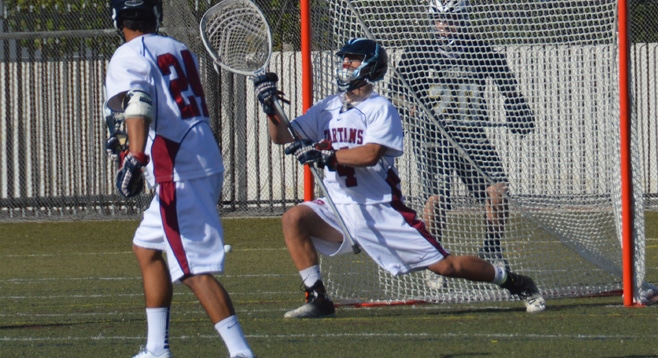 On Tuesday evening, The Tartans traveled up the freeway to face the Marina Vikings in a contest held at Westminster High School.

Seven seconds into the game, junior Patrick Fallon (2 goals, 4 assists) put SMES on the board.  Tartans sophomore Nick Shanks (5g, 1a) would score the next three goals, the last of which with nine seconds left on a terrific pair of fast break passes from Fallon and junior Oscar Gomez.  Each of these goals was the result of sparkling face-off wins by junior Ryan Harnisch (1g, 1a).  In fact, the center X was dominated the entire game by Harnish, sophomores Erik Suh (1g, 1a), Nick Totah and freshman Jeremy Davis (1g).

Like the first quarter, the Tartans scored four goals in the third –the scorers – Fallon, Shanks and the Harnisch brothers, all familiar with the back of the Marina net. By this point the running clock was in effect, and Coach Glen Miles was juggling his lineup.

The fourth quarter would see Tartan’s Suh, Jeremy Davis, Kuljis and senior Matt Williams round out the scoring. Another fine effort was seen from sophomore goalie Payton Fales, and the defensive play of sophomores Cayson Fincher, Zach Shor, juniors John Connelly, Fernando Delgado and senior Connor Fallon was oppressive to say the least.

Marina travels to Yorba Linda this Friday to take on the Mustangs. St. Margaret’s  (5–0) has a nine-day layoff to prepare for their trip north to San Francisco, where they’ll start a three-game slate starting with highly ranked St. Ignatius Prep, on April 3.