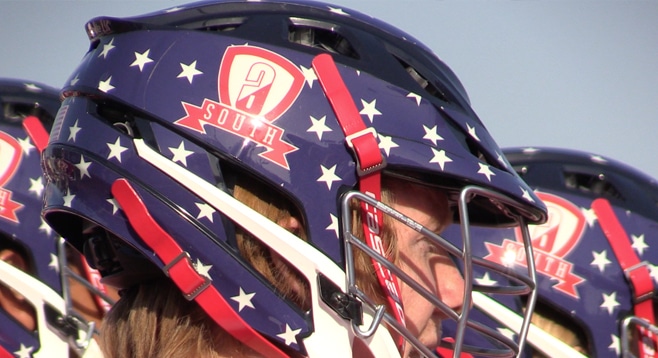 All-Star events are hit or miss  **ehhem Pro Bowl cough cough**. Luckily for area lacrosse fans, at the Adrenaline All-American game there was still something to prove as regular season foes banded together to put on a show for everyone in attendance and watching online.  The game brought everything you could ask for in an all-star game event; competitive atmosphere, big comeback, highlight reel plays, and athleticism all over the field. Watching the speed and strength of these future NCAA athletes was a treat for any fan at any level. After being down 7-1 in the first quarter the South rallied back to tie the game in the third, and complete the comeback in the fourth to win, 20-15.

Before the fans could even settle in the North took a 3-0 lead. Thanks in large part to Utah face off specialist Jace Thomas (Air Force), the North pushed their lead to 7-1. During the North’s dominance they controlled possession and forced turnovers in the middle of the field that led to a few easy finishes in transition. Throughout the onslaught Tucker Guyot (JSerra/Jacksonville) held his attackmen to little offensive production and pushed transition, trying to get something going for the South.

While only OC players only scored two goals, they were two of the most important. Mitch Kingsley (JSerra/Hofstra) scored a very important momentum stopping goal for the South. With the game at 7-2 the South began to feel hope and Kingsley’s goal snowballed into the beginning of a comeback. Resurging, the South ended the half only down four, 10-6.

The first half served as a learning experience for the South. Now comfortable with each other’s playing styles, the boys finally started to play team lacrosse. The third quarter was all South and they owned 70 percent of the possession for the 20 minute running time quarter. Down 11-9, Austin Streeter (San Clemente/Bellarmine) slipped under a check and finished the South’s second behind the back goal in a row, cutting the North lead to one and multiplying the comeback momentum. By the final three minutes the South had caught up to the North, tying the game at 11 all.

Throughout the comeback, the South goalies made save after save and turned up the heat by hitting his outlets early and often, taking full advantage of the speed of Hayden Ruiz (Santa Margarita/Boston U), Hunter Edington (St. Margaret’s/Manhattan), Peyton Garrett (San Clemente/High Point) and the rest of the South’s middies.