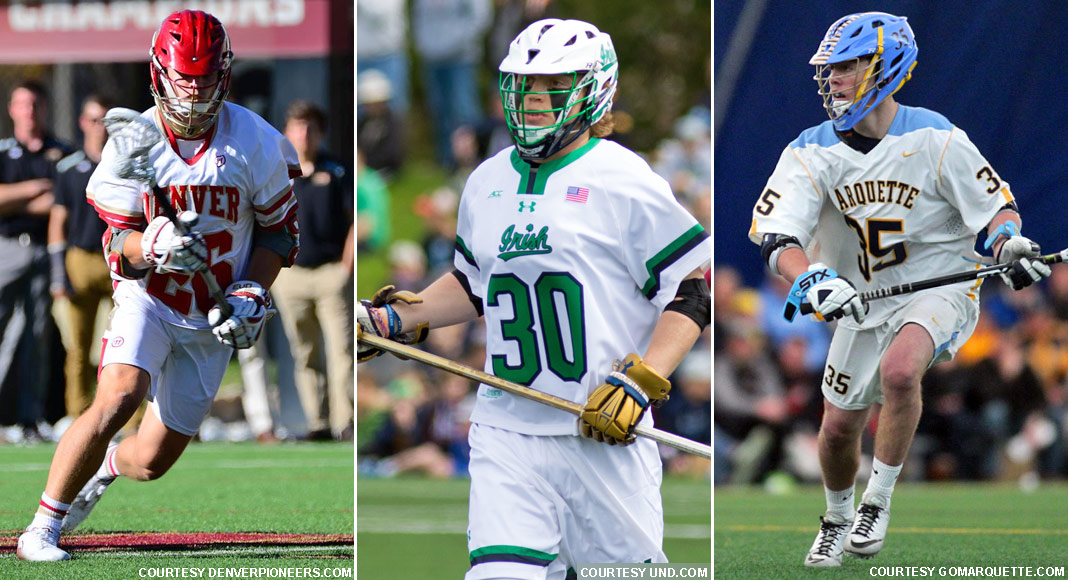 A scan of the rosters for each of the Nike/US Lacrosse Division I Men’s Preseason Top 20 teams turned up 31 SoCal players, another sure sign of the continued growth of the game on the West Coast.

Among those 31 players from Southern California were four each listed on the rosters of No. 8 Notre Dame and No. 9 Denver, who are scheduled to meet in the Pacific Coast Shootout on Saturday, March 9, at Orange Coast College. Tickets for the PCS are available here.

No. 10 Syracuse and No. 20 Marquette also list four SoCal players on their rosters.

Even more impressive, nine of the 31 SoCal players — nearly 30 percent — are first-year freshmen.

Of course, those 31 don’t include SoCal players at NCAA D-I programs outside the Nike/US Lacrosse preseason Top 20 or SoCal players at D-II or D-III programs. And a handful SoCal players who were on D-I rosters last season were missing this season for one reason or another, an indication of how difficult it can be to spend four years as a student-athlete in a top program.

Hastings has appeared in 15 games in two seasons, scoring three goals and recording one assist while collecting four ground balls. McCann has appeared in 11 games for the Blue Devils, posting a 6.24 GAA and .643 save percentage.

Anthony DeMaio appeared in 18 games as a redshirt freshman last spring, posting 13 points on seven goals and six assists. Nicholas transferred midterm to Maryland from Avon Old Farms, where he was preparing for a post-grad season.

O’Brien played in three games as a freshman, then sat out the 2017 season and appeared in two games last spring. Hughes is a 29-year-old walk-on who joined the Big Red after serving six years in the U.S. Marine Corp. He played lacrosse at Thousand Oaks HS and recently served as an assistant coach with Westlake HS.

A two-year starter for the Irish, Crance has recorded 64 ground balls and 16 caused turnovers in 45 career games. Mirer appeared in one game as a freshman last season.

Cuccia has appeared in 10 games in three seasons with the Tar Heels, recording one goal.

Pakzad did not appear in any games as a freshman, according to the Rutgers lacrosse website.

Fazio has scored 11 points (5g, 6a) in 21 career appearances and has twice been named to the Big East All-Academic Team. Henkhaus also has appeared in 21 games in two seasons and has scored eight career goals and handed out three assists.

All the roster, participation and statistical information above was compiled from official NCAA team websites.

Did we miss anyone? Share your updates in the comments below.