SoCal Express 2018 Edged by SweetLax at King of the Hill 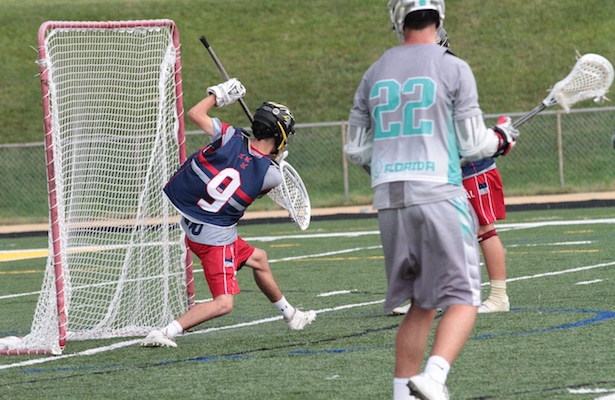 Stellar goaltending from Ethan Sepulveda (pictured above) and five points from Quentin Buchman (4g, 1a) were not enough to get the SoCal Express past SweetLax in the  King of the Hill playoffs last night.  SweetLax prevailed with an 8-7 win to move on to the championship game.  The Express will play Evolve for 3rd place today at 10:40 eastern time. Garrett Kuntz (2g, 1a) and Ellis Geis (1g) also found the back of the net for the Express.

The Express Elite split their two earlier games yesterday. Geis (2g), Buchman (1g) and Michael Chew (1g) scored the only goals in a 10-4 loss to Amp’d.  Sepulveda and the defense led the way in a 6-2 win over T2. Justin Welling popped in two goals while Kuntz, Buchman, Geis and Andy Shin all added one in the victory over T2.

Quentin Buchman, Ellis Geis, Myles Smart, and Matt Ury were all named to the tournament All Star Team.

Four from Express Named to 2019 All Star Team