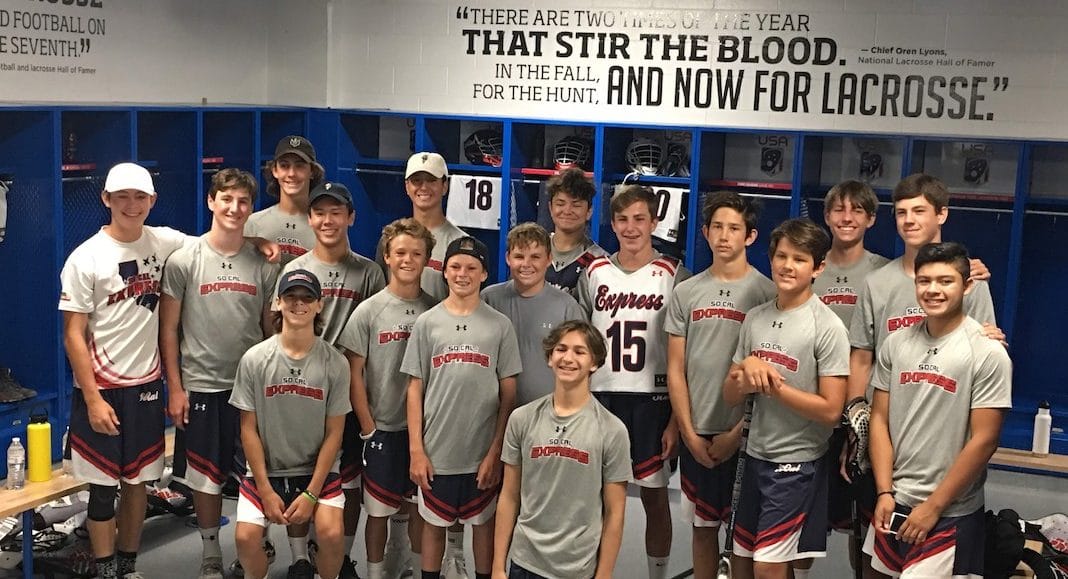 Navy great Glen Miles, boys’ lacrosse coach at St. Margaret’s Episcopal School and co-founder of So Cal Express Lacrosse, gave his 2022 Express team a unique look into his life and accomplishments while traveling back east to compete in three separate tournaments this month.

Upon arrival in Baltimore in early July, the team made their way to the Lacrosse National Hall of Fame and Museum where Coach Miles held practice for the team on the Hall of Fame’s Tierney Field, home to dozens of high school and college matchups including Navy and Cornell. After practice, Miles, a 2016 inductee of the Hall of Fame, treated the boys to a private tour of the museum including a look at his own accomplishments and a video interview of his on display in the museum.

After competing in the 2022 National Championship July 7-8 in Bel Air, MD, the team traveled south to Annapolis to face some of the best competition in the country at the Naptown Lacrosse Challenge beginning July 9. There, Express players and parents had the unique opportunity to tour the U.S. Naval Academy with Coach Miles, one of the most decorated players to play for the Academy.

While at the Academy, Miles, a midfielder, was a three-time All-American and was named the nation’s top midfielder in 1986. The boys saw the fields where their long-time coach played and practiced as an undergrad while he shared stories of success and struggle (and a few antics) during his time in Annapolis.

As the rising high school freshmen walked the impressive campus and took in its rich history, several companies marched past in varying uniforms depicting their rank, including “plebes”, newly admitted freshmen, who had just arrived for Plebe Summer, a program designed to quickly acclimate civilians to as a midshipman. While watching and listening, each Express player could not help but think that these young men were just four years their senior, and Coach Miles challenged his players to begin considering where they want to steer their lives and what sacrifices they may need to make to get there.

After the tour the boys made their way to the Navy-Marine Corps Memorial Stadium for the tournament banquet but made one more special stop before sitting down for dinner – the United States Naval Academy Hall of Fame where Miles was inducted in 1986. Miles is one of only 32 players in the academy’s history to earn 100 career points and became the only Navy lacrosse player to receive the Lt. j.g. Donald MacLaughlin Jr. Award, named after the former Navy lacrosse standout who was killed in action in 1966.

Although the So Cal Express players were well aware of Coach Miles’s military background (it is fairly evident on the field) and lacrosse expertise, it is doubtful any truly understood the accomplishments or contributions their coach brought to Navy Lacrosse and the growth of lacrosse in our nation as a whole before this experience.

St. Margaret’s player Hayden Chester explained, “Touring the academy with Coach Miles and seeing all that he accomplished was really cool. We walked in his footsteps as a lacrosse player.”

Will Stahl shared, “It’s really amazing to see how accomplished and recognized he is as both a player and coach. I was so impressed by how many college coaches recognized him and approached him with so much respect. We’re lucky for his mentorship and leadership.”

For Miles, the opportunity to bring his players and their families to Annapolis was also very special. While sharing oysters on the dock overlooking the academy, he reminisced about his time at the Naval Academy.

”Navy is truly a special place to this country and I am humbled to have had the opportunity to attend the school and represent Navy Lacrosse,” Miles said. “It is also quite special for me to come back and share some stories with our great young players and families. Love it!”

The team continues their east coast tour at the FLG in 3D tournament in Boyds, MD this weekend. And while this 2022 team is focused on the present challenge and what they need to do to provide more opportunities in the future, this very special look into the past over this week has given these boys a perspective, understanding and appreciation for their coach and the dedication he has for them and their development.