Back to Back: SoCal Express 2022 Black Battles to Repeat As Sand Storm Champions 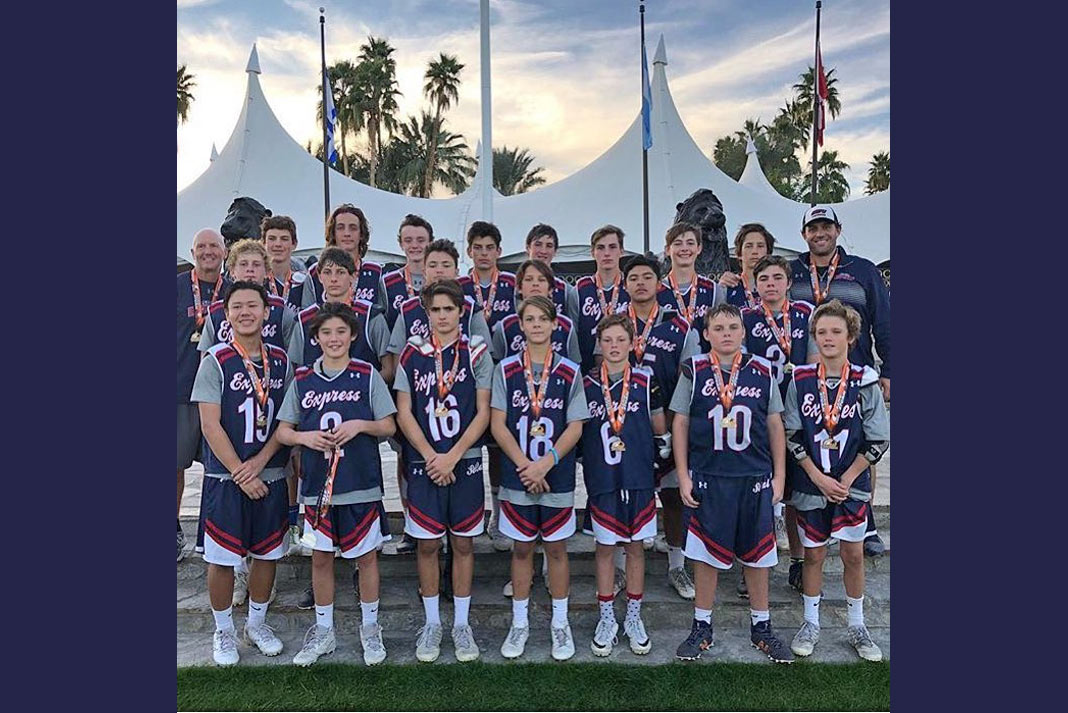 Sandstorm has been dubbed the granddaddy of youth lacrosse competition and touted as the largest lacrosse tournament in the world, with over 340 teams competing in 14 divisions. To win one’s division at Sandstorm is an elusive accomplishment. To do it twice in a row is very special.

At the start of this past weekend in Indio, 28 teams began play in the 2022 Boys Division. At the end, just one was left standing.

As returning champion, So Cal Express — this year coached by Adam Guy and Tom Groeninger — seemed placed in the “bracket of hell” compared to the other three divisions, matched against the strongest contenders, many they knew too well.

There was no time for rest, as Express’ second opponent, ADVNC San Francisco proved just as hungry as Colorado. After meeting up in Del Mar and Oceanside this fall, Express was ready for ADVNC to bring their physicality to the field. Express defenders Halen Hickman-Goveia, Nate Warren, Easton Jellerson, Diego Lopez, and Caleb Richardson stayed heavy-handed, while midfielder Carmelo Higgins powered through to the goal multiple times. ADVNC’s strategy of playing zone defense backfired, slowing down the pace of the game, and not giving them enough time to catch up. Express proved nice guys don’t always finish last, with a 5-2 victory over their Nor Cal nemesis.

Although the desert sun beat down on players across all 65 fields in Indio Saturday, So Cal Express kept their energy up as they finished Day 1 against their toughest opponent yet. True Lacrosse, with a roster of players from across Indiana and Ohio, confirmed they grow everything a little bigger in the Midwest. They met Express late in the day with one win and one tie under their belts. Clear size mismatches didn’t daunt the Express players, even when True notched a two-goal lead. Their size couldn’t compete against Express’s ball handling and lacrosse IQ. With quick dodging by middies Will Stahl and Casey Copeland, and sharp shooting by midfielders Matt Groeninger, Riley Chester and Radyn Badraun, along with Griswold’s ability to muscle his way to the crease, Express was able to pull out the W and end Day 1 as the only team in their division with a 3-0 record.

On Sunday morning Express was ready to finish things off, even if they had to do so without their starting FOGO who succumbed to the flu the night before. They had to face another nemesis, Mad Dog Select. Midfielders Drew Anderson, Lincoln Dodd and LSM Hayden Chester shared responsibility for possession at the X. Their tenacity, paired with strong goaltending in the first half by Sebastian Chicas. Still, Mad Dog would not give up, and the game was tied 5-5 with about a minute left, when attack Tyler Matthews took control over one defender and hit a clean bounce shot to give Express a one-point lead. Then goalie Drew Tyson stopped a one-on-one snipe in the last 30 seconds to clinch the win. While positioning changes left Express a bit exposed in their last division game vs Texans Chaos Lacrosse, Express’s overall record had already secured their spot in the semi-finals.

Sunday afternoon revealed just how tough Express’s division had been when in the semi-final, Express annihilated an undefeated LA Heat 10-1.

As the sun dropped into the surrounding mountains and Sand Storm crowds began to dissipate, the finals would match So Cal Express against the Arizona Outlaws, who had beat out Denver Elite by just one goal in the semis. In the championship, even with few faceoff wins, the defense stayed strong to keep So Cal in the game. The score stayed within one or two throughout, with a few lead changes, showing both teams deserved to be there. In the second half, Express pulled ahead by three, with goals by Matthews (2), Groeninger, Stahl, and Pollard to make the score 5-2. The Outlaws managed one more to close it to 5-3, but time ran out and Express would repeat as champions.

While the back-to-back victory at this legendary tournament is memorable, it is also bittersweet. This will probably be the last Sand Storm tournament these players will compete at together. As 8th graders this year, next January they will most likely find each other on opposing sides of the field as they return to represent their respective high schools over the next four years. For now, these kids will revel in the glory and gratitude of a very special experience with some very special teammates.