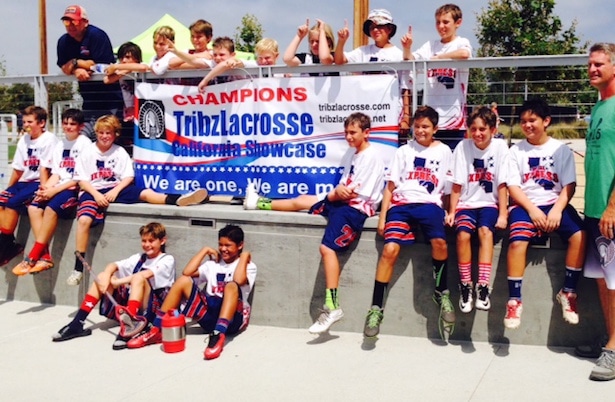 The inaugural season for SoCal Express 2022 turned out to be a banner one, with the team racking up a 15-0 undefeated record and three championships. Led by Head Coach Jon Fox, the boys consistently impressed with skill and teamwork beyond their years.

“I had so much fun coaching this team,” Fox said. “The boys are unselfish, pass the ball, and play smart. Each position was full of talented players and they all contributed to each of the wins. I can’t wait to watch them develop and play in high school.”

This event proved most challenging — and thrilling — for the team. In Sunday’s final they faced a beefier Seattle Starz team who were ready to avenge their Saturday loss.

The game was tight, penalties were frequent, and sidelines were boisterous, especially Seattle’s. The scoreboard featured only one- or two-point leads and ties, and Express was never ahead. With seconds winding down in the second half, down 9-10, Express held possession and scrambled to find a shot. Just as the ref counted to “1,” a quick pass to the middle from Luke Lemus and a last-second shot by Matt Groeninger landed in the net to tie the game 10-10 and send it to overtime.

Express’ Dante Decobilus won the first faceoff of overtime, and a sweeping Casey Copeland took a penalty to go man-up. The EMO unit patiently ran their play behind the goal, and quickly transitioned the ball up top for the game-winning bounce shot from Makai Todd, resulting in a dog-pile team celebration with sticks and helmets flying through the air.

Express had complete control throughout this event, outscoring opponents 75-6 through six games. Their final game pitted them against a rough Crusaders team from San Diego, who drew more flags than a 4th of July parade. The game ended with 7-1 scoreboard, and lax sticks taking to the sky again in victory.

Even with humidity peaking and temperatures swelling, Tribz Lacrosse aid out the perfect venue to finish out the summer. The team scored fast and often, with big wins over Crusaders and Factory, and rolling over two 3d San Diego teams. The championship was awarded to the team with the best record.

So it’s safe to say the fighter jets on their new jerseys are appropriate — SoCal Express 2022 took off this summer and soared above the competition.