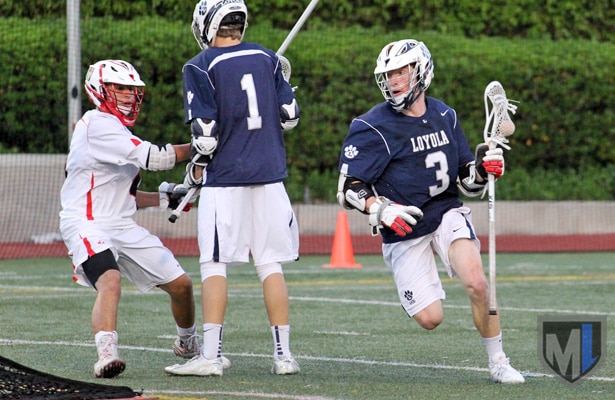 Senior attack Sean Smith scored five goals, three of them in a third quarter flurry that broke the game open as visiting top-ranked Loyola ran away from No. 2 Harvard Westlake 10-5 in a Mission League contest Tuesday night.

The Cubs (5-1, 2-0), who ascended to the top spot in the coaches poll Monday, led 5-1 at halftime, with two of the goals from Smith. But Harvard Westlake (4-1, 1-0) scored quickly to open the third quarter, cutting the margin to three, before Smith rattled off three in a row over a three-minute span to essentially put the game out of reach at 8-2 with 6:30 left in the third.

With the Loyola defense creating 14 Harvard Westlake turnovers and collecting 35 ground balls, and with Cubs sophomore Aidan Hesse holding his own against the Wolverines’ Princeton-bound face-off middie Philip Thompson, winning seven of 18 draws, possession was largely with the Cubs.

And when the Wolverines did put shots on goal, Loyola junior goalie Joe Theuer was there. He finished with 13 saves and started clears that failed to get the ball to the Cubs’ offense only twice.

Thompson scored three times for the Wolverines, two coming late in the fourth quarter, and Asher Early and Jonas Hirschland scored one each.